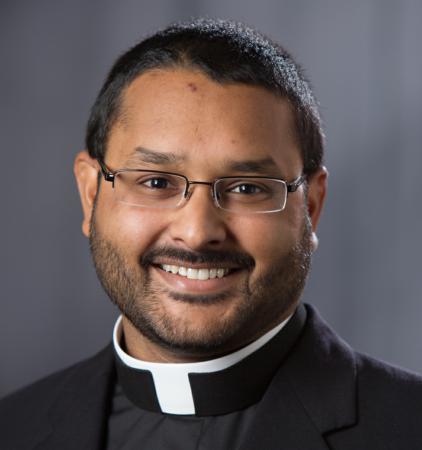 This is the first in a series of articles profiling each of the eight men who will be ordained to the priesthood by Cardinal Seán P. O'Malley on May 20.

Born three months premature in the streets of Calcutta, India, Deacon Sexton was adopted as an infant by his mother, Ellen, a devout parishioner of St. Mary Parish in Dedham.

As a young boy, he grew up in a house filled with women -- his mother, his two aunts and his grandmother made up his immediate family. And he always felt drawn to the priesthood.

"It's not like I looked at any one particular priest and said, 'I want what they have,' but it was more like I always thought that I was saved for a reason," he mused.

"I remember one Christmas when I was very young, I asked for a chasuble. I didn't even know the name of it -- I just wanted one of those things that the priest wears," Deacon Sexton said with a laugh, adding, "needless to say, she did not get one for me."

As a teen, he was very involved in the LifeTeen program at his parish.

"It was really through LifeTeen that I came into an understanding of the faith," he said. "It was a very immature view of the faith, because I was 15, but it was a great place to start."

Although he always entertained thoughts of the priesthood, Deacon Sexton also pursued other "mainstream" interests, he said. He dated, attended Catholic University in Washington, D.C., and considered a career as a politician.

By the time he was 19, Deacon Sexton was fairly certain he was being called into the priesthood, so he applied to the seminary, and was sent by the Archdiocese of Boston to St. Charles Borromeo Seminary in Pennsylvania to begin his studies. One year later, he left the seminary, unsure of God's call.

"I remember thinking, 'I don't know if this is for me or not, but I think I'm too young to make a commitment,'" he recalled.

For the next six years, Deacon Sexton remained a parishioner at St. Mary's. He finished his college studies and became a certified history teacher, but "never fully shook off the seminary idea."

What ultimately led him back into the seminary once again was LifeTeen. No longer a teen, he had returned to the program as a CORE member, a mentor to the young people involved in LifeTeen.

"Those young people challenged me, not by anything explicit, but by their actions," he said, adding that their dedication made him reevaluate his own relationship with God.

In 2012, Deacon Sexton entered St. John's Seminary -- a choice he is very happy he made.

"If we believe God has a plan for each of us -- which I do -- then I definitely think that the priesthood is what he planned for me," he said.

As his time at St. John's Seminary is coming to an end, he feels he will miss the structure of seminary life most of all.

"I like being busy, but I very much have come to love the structure of always knowing when Mass was going to be, when the prayers were going to take place, when meals were going to be eaten in common -- that is what I will most miss I think," Deacon Sexton said.

While he is looking forward to his future ministry, Deacon Sexton acknowledged that he is becoming a priest at a time in which Church faces challenges bringing its message to the world.

"We are in a clash with the culture," he said. "We have in Pope Francis someone people have really taken to, but Church teaching is still Church teaching."

He believes that he is called to be an "approachable" priest.

"I want to be the kind of priest that someone can feel comfortable sitting down with me and having a beer," he said. "I want to be a sign to the world of God's presence, but also a sign that the priest is a normal guy -- I think that's a very important thing to show to the world of today."