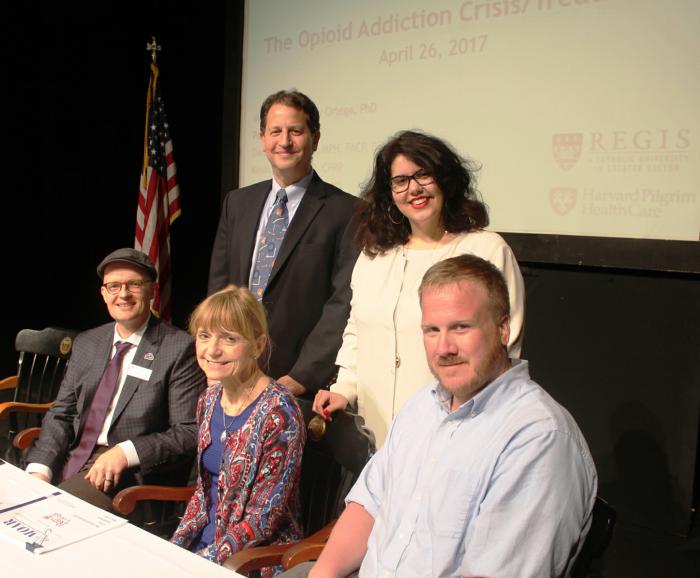 WESTON -- Regis, a Catholic university in Weston, hosted a forum on the deadly opioid epidemic April 26 as part of its Regis President's Lecture Series on Health. The discussion drew leading experts from around Massachusetts and nearly 300 people attended including nurses, social workers, mental health professionals, students and members of the public.

"It's a complex illness that is mental, physical and spiritual," said Owen.

The "disease of social isolation" has a stigma that is dangerous and keeps people out of treatment, according to Owen. Fear of what people would think is why he did not seek help sooner. To him, facing treatment was like facing death. Until one day when three police officers, whom he refers to as his guardian angels, rescued him. He described his physical withdrawal as horrendous. Owen believes that part of a successful recovery is to re-establish social connections with positive people and seek treatment for emotional problems.

Alford said the medical community is much more focused on addressing pain as well as what he calls "societal medication mania" that has caused patients wanting prescriptions. According to Alford, the "lack of training in pain and addiction at all levels of health professional education," is a cause of over-prescribing. "Pain is very subjective and difficult to determine in a single patient visit," said Alford.

Kevin T. Henze, PhD, staff psychologist for the Mental Health Recovery and Rehabilitation Treatment Program at the Veterans Hospital in Bedford, explained how to end to the epidemic. "We already have developed the necessary evidence-based interventions, treatments and recovery support community practices to end the opioid epidemic in Massachusetts and more broadly," said Henze.

The problem is access, information and ability to pay. In fact, only about 2.2 million people, or 1 in 10 of those with a substance use disorder, receive any type of treatment. The consequence of not seeking treatment is death. The VA is focused on expanded access to treatment.

Maryanne Frangules, executive director of MOAR, advocates for eliminating the stigma felt by those affected. "People speaking up for addiction will turn it around," said Frangules.

The most recent data shows that only 19 percent of people receiving addiction treatment services receive any outpatient treatment services. Inadequate community programs leave the majority of these individuals with no support system to continue their path to recovery. Frangules noted there are 10 peer recovery support centers available throughout Massachusetts, but it is still not enough.

The Regis President's Lecture Series on Health, which offers free contact hours for nurses and social workers, was established in 2007 and is hosted in partnership with Harvard Pilgrim Health Care. The unique series of lectures is designed to challenge the community to develop new skills to build awareness of contemporary health and wellness issues and learn to effect positive change. The next lecture in the series will be "Brain/Breast/Lung Cancer Treatment/Western and Complementary Medicine Modalities," held on Oct. 25.