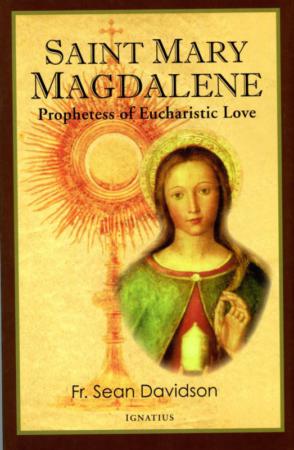 This is the cover of "St. Mary Magdalene: Prophetess of Eucharistic Love" by Sean Davidson. The book is reviewed by Eugene J. Fisher. (CNS)

These two short books about saints are devotional, suitable for spiritual reading and quiet meditation. Wright's book narrates the lives and accomplishments of two scions of noble families in what are today Switzerland and France in the late 16th and early 17th centuries, the time of the Catholic Reformation.

Together, they were instrumental in founding religious centers and a religious order of contemplative nuns who also worked to help those in need throughout Europe.

While Francis de Sales realized his vocation to the priesthood at a relatively young age, Jane de Chantal was happily married at an early age and raised children and handled her family estates after the death of her husband in a hunting accident.

The two met fortuitously at a time when Jane most needed spiritual guidance. Francis became her spiritual mentor during the period when her children were growing to maturity and she was able to envision a calling to the religious life. Their souls connected and both learned from each other to love God more deeply, a model for our own spiritual journeys today.

Unfortunately, although I have a deep reverence for Mary Magdalene, the "apostle to the apostles" and the first person to see the risen Christ and to share the good news of Christ's resurrection, I cannot recommend the book by Davidson.

Most of it is inspirational and worth reading. The author, however, commits numerous errors of fact, especially with regard to the Scriptures. Early in his book he attacks Catholic biblical scholarship, which he sees as tainted with Protestantism and feminism, as "ideological" and the work of "Anglo-Saxon" thinkers, ignoring Irish, Italian, Polish and other Catholic scholars.

To give just a couple of examples of the author's misuse of Scripture, he states that in John 12:19 "the Pharisees were considering putting Jesus to death," which is not what the Scripture states. Rather, they are positively moved by Jesus' triumphal entry into Jerusalem and the resurrection of Lazarus.

He states that John 11:45-54 has the Pharisees "actively persecuting" the followers of Jesus, when in fact John states that they raised concerns in the Sanhedrin about Jesus, but it is the high priest Caiaphas who decides that Jesus was becoming so popular that the Romans might see him as a possibly revolutionary figure and vows that Jesus should die. All three Synoptic gospels are clear that it was Caiaphas who after the cleansing of the Temple went to Pilate, who alone had the power to execute Jesus.

Davidson calls the "Old Testament God" a "harsh judge" while Jesus spoke of God "in a new way." These negative views of the Hebrew Scriptures and Jews come dangerously close to reviving the ancient Christian teaching of contempt against Jews and Judaism, a denigration of the Jewish faith of the Jew, Jesus, which rationalized persecution of the Jews throughout Christian history.

St. Mary Magdalene, who was a Jew and truly a prophet of eucharistic love, might weep reading such passages in this otherwise good book.

Fisher is a professor of theology at St. Leo University in Florida and former director of Catholic-Jewish relations for the U.S. Conference of Catholic Bishops.