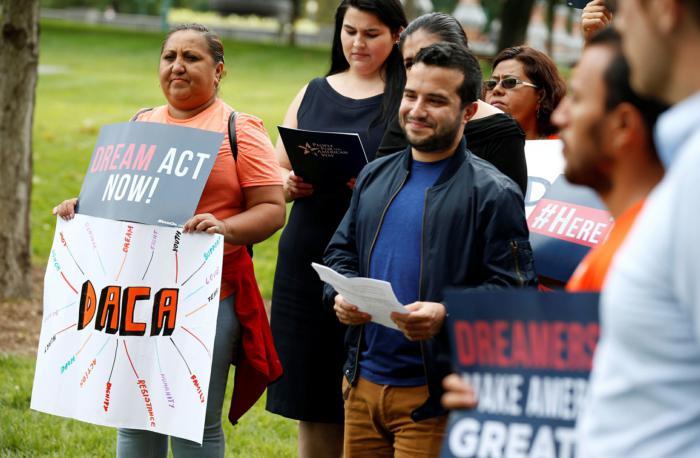 Immigration activists and those enrolled in the Deferred Action for Childhood Arrivals program, or DACA, take part in a rally Sept. 12 in Washington to urge Congress to pass the DREAM Act. Afterward, they went to Capitol Hill to deliver a million signatures to Congress. CNS photo/Joshua Roberts, Reuters

Debbie Rambo: Speak up for the Dreamers

In a strongly worded statement, the bishops of the four dioceses of Massachusetts voiced support for young immigrants affected by the recent rollback of the Deferred Action for Childhood Arrivals (DACA) program, and urged Congress to act to protect them.

Put in place in 2012 by the Obama administration, DACA has allowed young, unauthorized immigrants brought to the U.S. as children to remain in the country, so long as they are pursuing an education, working, or serving in the military. President Donald Trump began winding down the program on Sept. 5, announcing that Congress would have six months to pass legislation that would save the program.

Currently, there are close to 800,000 immigrants, often referred to as "Dreamers," who benefit from the program. Only about 8,000 Dreamers live in Massachusetts, but nearly 20,000 immigrants in the state are DACA-eligible.

"These children and young adults are innocent of any wrongdoing. They should not be punished for living in the United States of America. They have no other country to call home," the bishops wrote in their statement, released Sept. 13.

"They are our current students. They are our high school and college graduates. They are service workers and professionals. They are productive members of our society. In short, they are supporting themselves and their families and have become an integral part of the melting pot we call America," they continued.

The DACA program has "clearly been successful since its inception," they wrote.

With six months to pass legislation, "Congress cannot be silent on this issue. Congress must act now."

Speaking to The Pilot Sept. 13, MCC executive director James Driscoll noted that it's crucial not to let DACA slip out of the public's, and lawmaker's, minds.

"It's very important to urge Congress to come together and get things done so families across the country aren't broken up," he said.