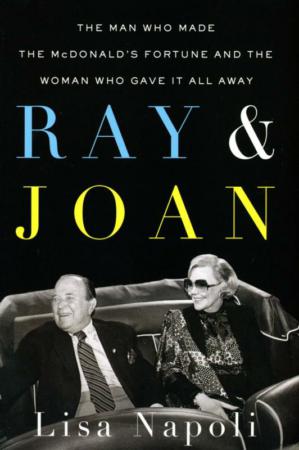 This is the cover of "Ray and Joan: The Man Who Made the McDonaldÕs Fortune and the Woman Who Gave it All Away" by Lisa Napoli. The book is reviewed by Daniel S. Mulhall. (CNS)

Ray Kroc was driven to succeed. The first 50 years of his life he hustled to sell paper cups and then milkshake machines. He supported his wife and daughter in a little house in the Chicago area but never hit the big time. But he never gave up on his dreams, and he continually looked for opportunities to prosper.

Kroc's genius was taking other people's creations and figuring out how to sell them to the masses. This is what he had done selling cups and mixers, and what he would do with the small carryout restaurant in the Southern California city of San Bernardino owned by the McDonald's brothers. Kroc loved the way the McDonalds had set up their restaurant for speedy, consistent delivery of hamburgers, fries and milkshakes at a reasonable price. He took this restaurant and made it a worldwide chain, one of the best-known products in the world.

Joan Mansfield Smith and her husband, Rollie, held the McDonald's franchise in Rapid City, South Dakota. Joan also played the piano at local restaurants, where she met and enchanted Ray Kroc with her beauty and skill at the keyboard. Ray courted Joan relentlessly, although he was married, until Joan finally agreed. They were married from 1968 until Ray's death in 1984.

The marriage was stormy for numerous reasons. For one, Ray was very conservative both politically and personally while Joan supported liberal causes. However, the biggest obstacle to their marriage was that Ray was an alcoholic who refused to admit his problem. Because of Ray's drinking, Joan became very interested in programs to help alcoholics and their families, and in this way learned the joy of philanthropy, of giving money to causes that she believed in so as to make a difference in the lives of others.

The story of Ray's drive to be successful and Joan's career in philanthropy are ably told by Lisa Napoli in her book "Ray and Joan: The Man Who Made the McDonald's Fortune and the Woman Who Gave It All Away." Napoli, a seasoned journalist, became interested in Joan's giving in 2012. A reporter for the NPR radio station KCRW in Santa Monica, California, Napoli learned of the possible destruction of Paul Conrad's sculpture "Chain Reaction," which had been commissioned anonymously by Joan 20 years before. Finding no single record of Joan's giving, Napoli was compelled to research and tell her story. Make no mistake; while Ray's story is also told here, it is Joan's story that Napoli longs to tell: an 11-page appendix listing Joan's many gifts is provided.

While Napoli clearly thinks fondly of Joan (who was given the nickname St. Joan of the Arches by those who received her largess), she does not give her a halo. Napoli points out that Joan loved to smoke and gamble, and while she supported alcoholism education, her parties were lavish. While Joan loved her private jet and chauffeur-driven limo, Napoli also recognizes the damage done to the Kroc and Smith families by the divorces.

Celebrity bios tend to have a breathless quality to them. So and so is "touched by greatness" or as Napoli writes, Joan "knew from how intently he (Ray) looked at her when they were together that if she wanted, he would save her personally too." Fortunately, Napoli moves away from this style of writing as she moves more fully into Joan's story.

This is an easy to read, enjoyable book, perfect for a few days at the beach or relaxing in the shade.

Mulhall is a catechist who lives in Louisville, Kentucky.