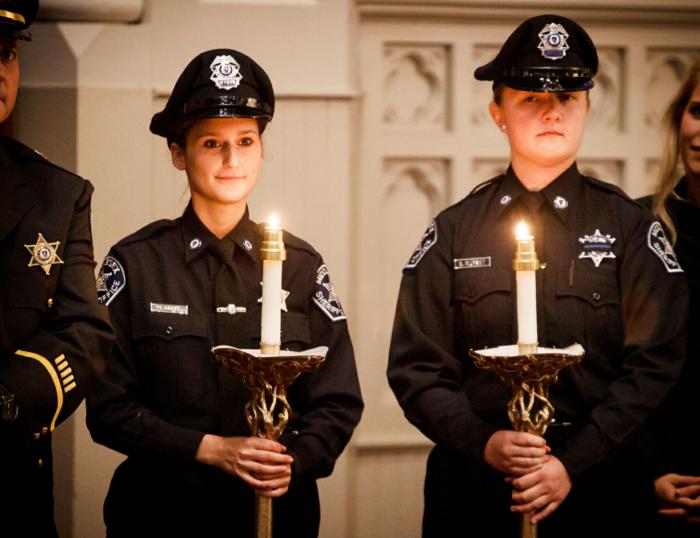 Officers from the Middlesex County Sheriff's Office hold candles at the 2016 Mass for Public Safety Personnel and Families. This year's Mass will be held Oct. 1 at noon at St. Theresa of Avila Church in West Roxbury. Pilot file photo/Gregory L. Tracy

SOUTH END -- Police officers, firefighters, EMTs, corrections officers, and other first responders from across the Archdiocese of Boston will be honored Oct. 1 during the annual Mass for Public Safety Personnel and Families, held this year at St. Theresa of Avila Church in West Roxbury.

The Mass will begin at noon, and will be celebrated by Cardinal Seán P. O'Malley.

Colloquially referred to as the "Blue Mass," the Mass for Public Safety Personnel and Families serves as a way to thank first responders and public safety personnel for the work they do on a daily basis.

Like the Red Mass for those in the legal profession and the White Mass for those in the medical field, the Public Safety Mass had been a longstanding tradition in the archdiocese until the early 2000s. The Mass was revived in 2014 through a collaboration of the archdiocese's Office of Chaplaincy Programs and Office of Divine Worship with the goal of honoring all those who serve their communities in uniform.