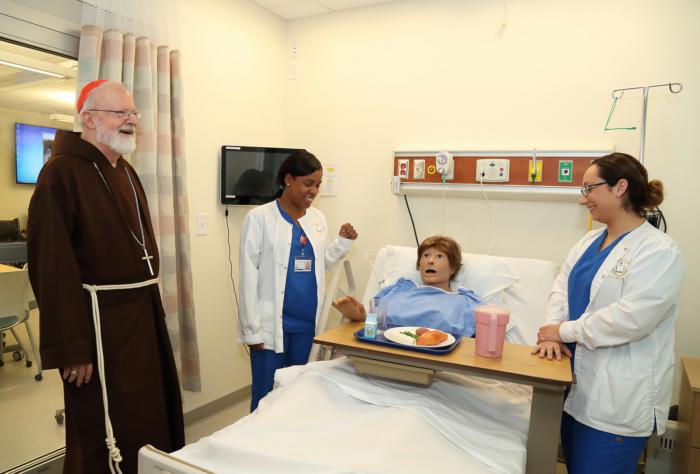 Founded in 1892, Laboure is the longest running nursing program in the Boston area.

"Laboure is not like other colleges in the region. We are totally devoted to healthcare, and the majority of our graduates stay within the region, working at hospitals and other institutions within Massachusetts," said interim president Dr. Lea Johnson.

The Mass was held at the Convent Chapel of the Sisters of St. Joseph of Boston, located on the campus of Fontbonne Academy in Milton adjacent to Laboure College, and attended by faculty, staff, students, alumni, and the community.

The Gospel reading was from Matthew 25:31-46, in which Jesus says when the Son of Man comes he will separate people on his right and on his left, saying to those on his right, "I was hungry and you gave me something to eat, I was thirsty and you gave me something to drink ... I was sick and you looked after me, I was in prison and you came to visit me."

As Cardinal O'Malley reflected on the Gospel during his homily, he urged those in attendance to remember to treat all people, especially those seeking healthcare, as if they were Christ himself.

After the Mass, Cardinal O'Malley met with current students and faculty on a tour of the college, and was treated to a demonstration of the nursing simulation lab and high-fidelity manikins. The cardinal experienced a brief scenario between students and one of the manikins, chuckling as the manikin complained of a stomach ache and asked the cardinal if he were a doctor. These simulation scenarios help students build their confidence and practice both patient care techniques and bedside manner before working with live patients.

During the reception, Dr. Johnson announced a new Laboure scholarship in the cardinal's name and Leo Thibault, the college's mission coordinator and academic advisor, shared images of the new stained glass being installed on the campus later this year, sponsored by alumni donations.

Regina MacKenzie, a graduate of the nursing program and Lourdes pilgrim with the Order of Malta, spoke at the reception about how her faith influences her vocation daily saying, "Love -- the natural expression of the Christian faith -- is found in acts of service to others. I embodied this passion as a brand-new nurse in Lourdes. And, it is a goal that I aspire to in my day-to-day function. One of the many things that makes Lourdes a place of healing is the presence of people who express their faith by helping other people. As custodians of the sick, while sharing the magnificence of God's healing love, we too benefit by intensifying our own faith."

While the college celebrates a historic 125 years of nursing and healthcare education, they're not done yet. Dr. Johnson encouraged attendees both to remember the roots of Laboure's Catholic tradition, and to carry that tradition on to future generations.

"A Laboure education is about devoting one's life to service -- in this case, it is service to others within the scope of the healing professions," she said.