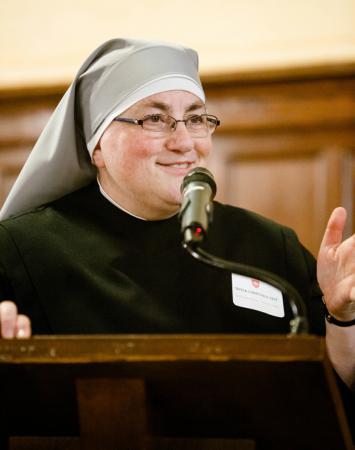 Sister Constance Veit delivers her keynote address on the importance of building "bridges between the weak and the strong, the old and the young." Pilot photo/Gregory L. Tracy

BRIGHTON -- Speaking with The Pilot after the annual Order of Malta Boston area Mass and Dinner, keynote speaker Sister Constance Veit, LSP, reflected on her experiences as her order's legal battle against Obamacare mandated contraception and sterilization coverage appears to be coming to a close.

"Archbishop (William) Lori once said to me, 'No matter what happens, never give up the joy of being God's disciple," she said. "That was just as the entire legal battle was beginning to take shape, and it was probably the best advice I was given."

Sister Constance is the director of communications for the Little Sisters of the Poor. Ever since the legal battles against Obamacare began, she has been at the forefront -- speaking to countless media outlets, being invited to address numerous organizations, and becoming very familiar with the court system and the HHS mandate.

In early October, the Department of Justice under the Trump administration issued a new finding. According to the Little Sisters of the Poor website, "the government issued a new rule and admitted what it should have said all along: that it violated the law when it tried to force religious ministries like the Little Sisters to violate their faith. Under the new rule, the federal contraceptive mandate will remain in place for most employers and will now include an exemption for religious ministries."

"It is almost over," Sister Constance said with a smile. "Now we can go back and focus on the real reason we are here: to take care of the elderly."

Sister Constance noted that plans are already underway for her to create an online video series this Advent season, urging Catholics to get involved with the elderly in their parishes and in their communities.

"People are afraid of the disabled and the elderly," she said. "Maybe it's that people don't want to be reminded of their own mortality. I don't know why it is, actually. But I want to encourage people to reach out to anyone in their circle: to the elderly, to people with special needs. Befriend them, take them to the market, just reach out to them."

"It's not hard," she stressed. "Just be human with other people."

Sister Constance noted that her involvement with the Little Sisters of the Poor began when she was 15 years old in Albany, NY.

"Being a nun was the last thing on my agenda," she laughed. "But being there, volunteering with the elderly, and just accompanying them in their lives awakened something in me that I didn't know was there."

"That's what I can't wait to get back to," she said with a smile.