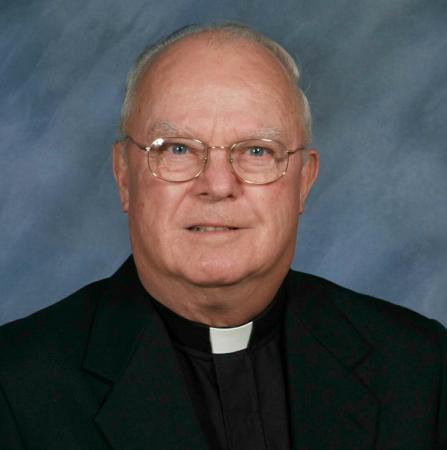 Father James B. Canniff, a senior priest in residence at Immaculate Conception Rectory, Malden, since his retirement on Dec. 10, 2001 died at the Malden rectory unexpectedly on Oct. 31. He had celebrated his 83rd birthday on July 14.

Born in Medford, July 14, 1934, he was one of the four children of the late John and Madeline (Brennen) Canniff; his brother John and sister Anne Plummer preceded him in death; his immediate survivor is his sister, Marie of Yarmouth.

He was raised in St. Clement Parish, Somerville attending both the grammar and high school. He went down the street to Tufts University for a year before entering St. John's Seminary as a member of the class of 1960. Cardinal Richard Cushing ordained him at Holy Cross Cathedral on Feb. 2, 1960.

The hospital chaplaincy in Cambridge was interesting because it served all the hospitals in the city at the time, among them Cambridge and Mount Auburn, and the chaplaincy consisted of a team of two or three priests.

Father Canniff was also a United States Navy Reserve chaplain, serving from 1961 until his retirement as captain in 1985.

On Oct. 23, 1984, Archbishop Bernard Law named him administrator of St. Mary Parish in Boston's Charlestown section, moving him just over the bridge from Cambridge. At the turn of the New Year, the archbishop named him pastor of the venerable Charlestown parish. The church, one of several designed by the famous Patrick C. Keely, is a gem both of external design and internal beauty. Father Canniff saw to the preservation and repair of the church.

On his retirement in 2001 he moved, again, across a bridge, to Malden's Immaculate Conception parish where he served as senior priest in residence. A regular celebrant of parish daily and Sunday Masses he was well liked for his well prepared and brief homilies; he remained very active in the parish in his various side pursuits, notably golf; days on the Cape; and catching up on the local pro-teams.

Gregarious and affable, he loved priests; as years passed and his contemporaries died, he was often called upon to be the homilist at their funerals.

He had been in good health, so his death was shocking news to the parish.