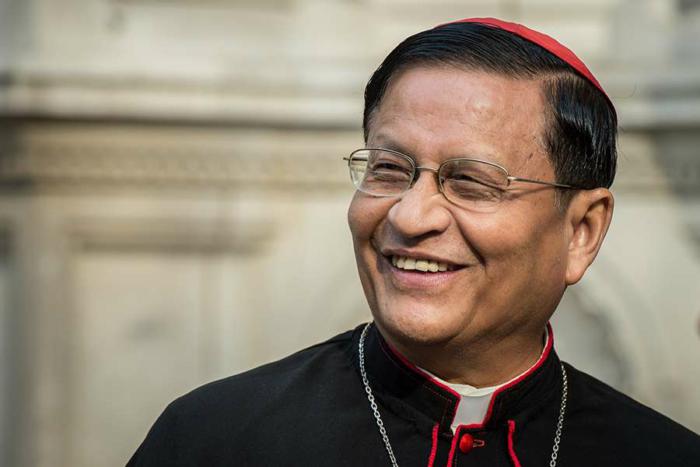 Vatican City, Nov 21, 2017 CNA.- To prepare for Pope Francis’ trip to Burma, Cardinal Charles Maung Bo, the first and sole Burmese cardinal in the Church’s history, met with the Pontiff in a private audience Nov. 18. The cardinal offered the Pope three recommendations for his upcoming trip.

Cardinal Bo told CNA that “the meeting lasted about 30 minutes,” and that the Pope took each of his recommendations under consideration.

What did Cardinal Bo recommend?

First, he asked the Pope not to use the term “Rohingya” in speeches during the trip. Cardinal Bo explained that “the term is controversial.” In the Bengali language it means “a person who comes from the State of Rakhine”, though it is frequently suggested, and a matter of widespread controversy, that Rohingya are “a separate ethnic identity.”

“Extremists are trying to mobilize a population by using the word Rohingya, thus generating the risk of a possible new interreligious conflict,” the cardinal explained.

The term “Rohingya” often refers to Muslims from in the Rakhine State of Burma, who are not granted citizenship under Burmese law, and thus are stateless. The United Nations estimated that 582,000 Rohingya have fled Burma for Bangladesh. Pope Francis has made a number of appeals for the protection of the Rohingya.

Cardinal Bo said that the correct term is “Muslims of the Rakhine State.” He added that there are other minorities in Burmese territory who are enduring persecution and conflicts, among them the Kachin, Kahn, and Shahn people. He said these ethnic minorities also face displacement, but the “media are weak in telling their story.”

Cardinal Bo’s second recommendation was to include in the Pope’s schedule a meeting with General Min Aung Hlaing, the Commander-in-Chief of the country’s Armed Forces. Burma functioned as a military dictatorship for more than 50 years, until democratic reforms taking root in 2011.

Despite newly emerging signs of democratic reform in Burma, also called Myanmar, the military still wields considerable political authority, including the appointment of cabinet ministers, and one-quarter of the nation’s legislature.

Although the Pope’s agenda has no meeting scheduled with the general, Cardinal Bo thinks it is important that a meeting take place. “For sixty years,” he said, “the Church has had no dialogue with the Army, while now a relationship has started, and we hope that the dialogue will improve.”

Cardinal Bo stressed that “an official meeting between the Pope and the general” would raise some issues, but there could be “a discreet private meeting,” because “neglecting the government during this trip could bring more tensions in future.” Cardinal Bo said that the Pope “would advise the general to work for peace, and have a greater respect for Burmese ethnic minority groups.”

Finally, the Archbishop of Yangon offered the Pope the opportunity to include a meeting with some Burmese leaders who promote interreligious dialogue.

He told CNA that the group of leaders is composed of “about 15 people, Christians, Buddhists, Muslims (including Muslims of the Rakhine State) and Hindus.” Cardinal Bo suggested the Pope include a meeting with them before one of the Masses the Pope will celebrate in the country. He told the Pope that “the group for the interreligious dialogue cannot be set aside, because this group could give a great contribution to build peace in the country.”

All of these suggestions are part of the Church’s effort to bridge communities in Burma. Although Catholics represent just one percent of population, they have become a sort of reference point for the other religions based in Burma, the cardinal said.

The cardinal shared with CNA that “Pope’s speeches will touch many issues: the situation of the Muslims of the Rakhine State, but also that of other minorities who are suffering.”

He added that “the Pope will speak about the need to work for peace,” but he will also mention the “equal use of natural resources” and environmental issues.

Burma is very rich in natural resources, including oil, gas, minerals, precious stones and gems, as well as timber and forest products. Despite that, about one-quarter of population lives below the poverty line. The exploitation of timber and forests make urgent the need to tackle environmental issues.

Burma’s complicated political situation led Cardinal Bo to ask Western world that “there are in fact two government in Myanmar, and the military one is very powerful. The west was very judgmental and strongly criticized Aung san Suu Kyi [a democratic reformer who has been criticized regarding certain human rights issues], but people who criticize don’t know what it means to dialogue with the military.”

Cardinal Bo said that “the west should better understand and back Aung San Suu Kyi, as she is trying to do her best to improve the collaboration between the government and military forces.”