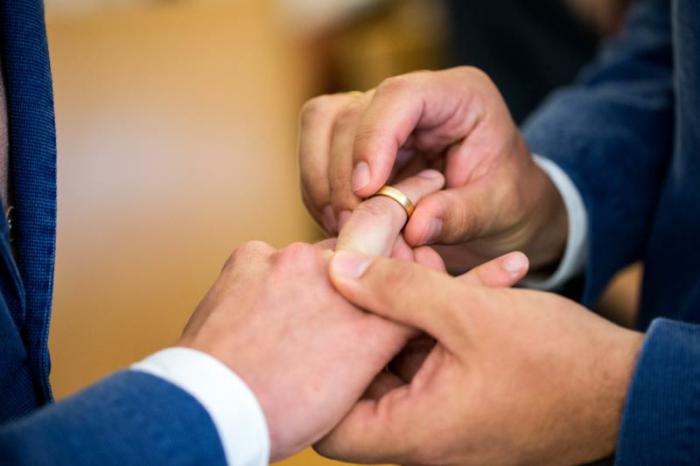 OSNABRUCK, Germany (CNS) -- The vice president of the German bishops' conference has urged a debate on whether Catholic clergy should bless same-sex unions.

"I'm concerned with fundamental questions of how we deal with each other; although 'marriage for all' differs clearly from the church's concept of marriage, it's now a political reality," said Bishop Franz-Josef Bode of Osnabruck.

"We have to ask ourselves how we're encountering those who form such relationships and are also involved in the church, how we're accompanying them pastorally and liturgically."

In the fall, the first gay weddings were conducted in Germany, following a June 30 vote by the parliament to allow full same-sex marriage.

"Same-sex relationships are generally classified as a grave sin in the church, but we need to think how we can differentiate," Bishop Bode said in a Jan. 10 interview with the Neue Osnabrucker Zeitung daily.

"Shouldn't we be fairer, given that there is much that's positive, good and right in this? Should we not, for example, consider a blessing -- something not to be confused with a wedding ceremony?"

He said the church should discuss same-sex unions in more detail and recognize "silence and taboo" settled nothing.

Canons 1055-1057 of the church's Code of Canon Law define marriage as an indissoluble union between a man and woman.

The June vote to allow same-sex marriage was condemned by German church leaders, including Archbishop Heiner Koch of Berlin, chairman of the church's Marriage and Family Commission, who said in a statement same-sex cohabitation could be "valued through other institutional arrangements."

However, it was approved by the country's Protestant church. Some lay Catholic groups, including the We Are Church organization, have called for same-sex couples to be offered church blessings.

In May 2015, the German church amended its employment rules to permit lay staffers to keep their jobs after they were divorced and remarried without an annulment or if they formed a gay union.

In his interview, Bishop Bode also said he believed fuller use should be made of lay "pastoral coordinators" to make up for a shortage of ordained clergy.

He added that women should be taking on "leadership roles in the churches," and called for a Vatican commission currently considering women deacons to expand its work.

"This commission is very much exploring tradition, but I think we shouldn't just start there," the bishops' conference vice president said.

"We must face the fact that women are doing much responsible work in the church today. I'd like to see a conversation between experts and competent bishops -- and as much contact as possible with the group dealing with these issues in Rome. This question will ultimately have to be decided by a council or synod."