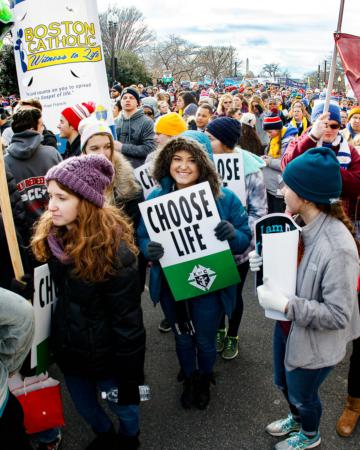 March for Life events planned across the U.S.

BRAINTREE -- In one week, hundreds of youth and young adults from across the Archdiocese of Boston will take to the streets of Washington, D.C. to give voice to the voiceless during the 44th annual National March for Life, Jan. 19.

Around 275 middle school and high school students registered to travel to the March through the archdiocese's Office of Lifelong Faith Formation and Parish Support, housed under the Secretariat for Evangelization and Discipleship. The students will be bused to Washington late Thursday night, Jan. 18, following a Witness to Life Rally held at St. Stephen Church in Framingham at 7 p.m.

The rally, which will be open to the public, will feature praise and worship music from the Boston-based group Delmore, as well as testimonies from pro-life speakers Sarah Mary Toce, Director of the New England Life and Leadership Project, and Paul Gondreau, professor of theology at Providence College. Bishop Mark O'Connell will be a special guest at the rally, and will give a blessing to those gathered.

Buses will depart from Framingham at 10 p.m., and will travel overnight, reaching Washington in the early morning.

A separate group of over 100 students from Cardinal Spellman High School in Boston is expected to meet up with the group once in Washington, as well as six or seven buses from the ethnic parish communities in the archdiocese.

Highlights from the itineraries for the group traveling with the Office of Lifelong Faith Formation and Parish support include Mass at the Shrine of the Sacred Heart before the March on Jan. 19, and tours of the Basilica of the National Shrine of the Immaculate Conception and the St. John Paul II National Shrine on Jan. 20 before arriving back at St. Stephen Church at 9 p.m. that night.

In keeping with long-standing tradition, Mass at the Shrine of the Sacred Heart will be celebrated by Cardinal Seán P. O'Malley.

According to organizers from the Office of Lifelong Faith Formation and Parish Support, students traveling with the group have received winter hats with "Witness to Life" printed on them, as well as rosaries, baby feet pins, and name tags. A large new banner was also made for the Boston group to carry during the March.

Those traveling have been encouraged to share pictures and videos of the March for Life online on social media, using the hashtags #WitnesstoLifeBoston and #LifeisPrecious.