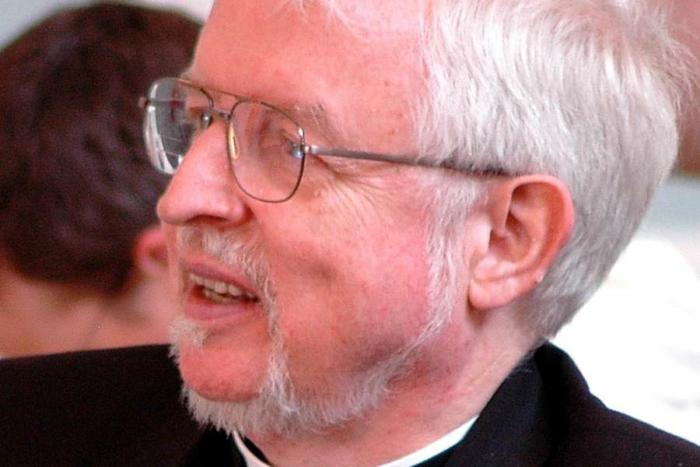 Ave Maria, Fla., Jan 12, 2018 CNA/EWTN News.- Father Matthew Lamb, the Cardinal Maida Chair of Theology at Ave Maria University, died early Friday morning, the university announced. A fitting conclusion to a life dedicated to education and a teaching career of 45 years, Lamb died in the company of two graduate students, who were keeping a prayer vigil at his bedside.

He died after a brief illness caused by pulmonary fibrosis. Lamb was 80 years old. Officials at Ave Maria University report that in the days leading to his death, he spoke openly about his desire to meet Jesus, and received the anointing of the sick and the Eucharist.

Lamb was born in Washington, D.C., in 1937, and entered the Trappist Monastery of the Holy Spirit in May, 1952. He was ordained a priest in 1962 in the Abbey Church. He later became a priest of the Archdiocese of Milwaukee.

Lamb taught at Marquette University, and later Boston College. While teaching in Boston, he was a cofounder of an influential academic study group on the work of St. Thomas Aquinas, which drew scholars from Boston College, Harvard University, Providence College, and other institutions.

He was the author of 12 books and hundreds of scholarly articles and papers. He was a member of the editorial board for Communio, a theological journal cofounded by Fr. Josef Ratzinger.

Fr. Lamb was an advocate for the development of rigorous and faithful centers of theological study, rooted in Catholic methodologies and practices. In 1997, he wrote that “there is no doctoral program in North America with a rigorous ratio studiorum that offers an integral formation in the doctrinal and theoretical traditions of Catholic teaching.”

In 2004 he left Boston College, with the intention of beginning such a program at Ave Maria University. For 10 years, he served as chairman of the university’s department of theology, where he drew renowned faculty to teach scripture, patristics, and systematic theology. In 2014, he stepped down from his administrative position, but continued to teach and write.

He was known as a serious intellectual, a prudent spiritual director, and an instrumental part of the renewal of American Catholic universities after the publication of Pope St. John Paul II’s Ex corde ecclesiae in 1990.

He had been honored with an honorary doctorate from the Franciscan University of Steubenville, the Robert Bellarmine Award from the Pontifical Gregorian University, the Ex Corde Ecclesiae and Veritas Medals from Ave Maria University, and a Lifetime Achievement Award from the American Maritain Association.

In 2014, writer Michael Novak wrote that Lamb “has passed along to others his own contemplation in the presence of the Love of the Holy Trinity, where all theology begins.”

Funeral arrangements for Fr. Lamb have not yet been announced.