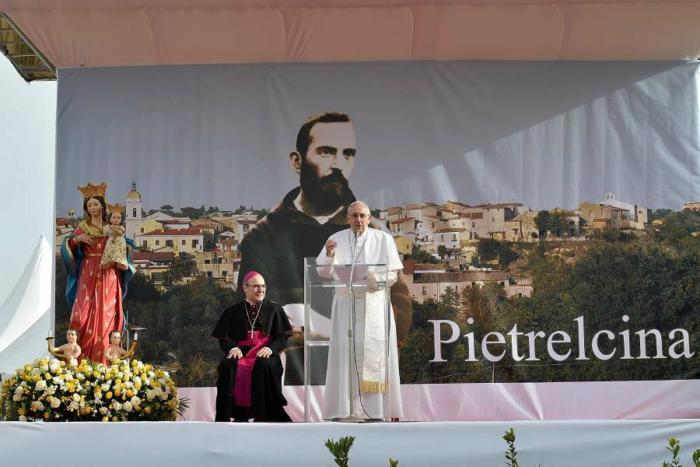 Pietrelcina, Italy, Mar 17, 2018 CNA/EWTN News.- Speaking Saturday in Pietrelcina, the town where St. Padre Pio was born, Pope Francis encouraged devotion to Holy Mother Church, explaining how despite the imperfection of its members, it was beloved by Padre Pio.

“Here [in Pietrelcina, Padre Pio] began to experience the motherhood of the Church, of which he was always a devoted son,” the Pope said March 17.

“And he loved the holy Church and sinful children, all of them. This was Saint Pio.”

Pope Francis spoke to faithful during his day-long visit to the town of Pietrelcina in the Archdiocese of Benevento, Italy during a day trip to the two towns where Padre Pio lived.

Upon arriving in Pietrelcina, the Pope greeted the archbishop of Benevento and the mayor of Pietrelcina. He then stopped to pray in the Chapel of St. Francis, which holds the “elm of the stigmata,” a tree under which Padre Pio used to pray, and where his stigmata appeared for the first time.

In his speech, Francis spoke about the spiritual torments Padre Pio underwent during his time in Pietrelcina. This was the town where the saint was born, but he also spent time there during a period of bad health.

“This was not an easy time for him,” the Pope said. “He was strongly tormented in his heart and he feared falling into sin, feeling assaulted by the devil.”

Departing from his prepared speech, Pope Francis asked those present if they believe that the devil exists, adding that, if they are not so convinced, he will ask the bishop to do some catechesis on the subject.

“Does the demon exist, or does he not exist?” he asked, the crowd responding, “yes!” He continued, saying that the devil “torments us, he deceives us,” and that Padre Pio “was afraid that the devil would attack him, push him to sin.”

Francis noted that in the face of these fears, however, what Padre Pio did was pray: “In those terrible moments Padre Pio drew vital life from the continuous prayer and trust he placed in the Lord.”

When these temptations from the devil would come, Padre Pio said he would confidently abandon himself into the arms of Jesus and they would disappear, the Pope said.

“Here is all theology!” he continued. “You have a problem, you are sad, you are sick: abandon yourself in the arms of Jesus.”

He pointed out how prayer was vital to Padre Pio for discernment of God’s will, and how he especially loved the Mass and the sacraments.

“Padre Pio immersed himself in prayer to adhere ever better to the divine designs. Through the celebration of Holy Mass, which was the heart of every day and the fullness of his spirituality, he reached a high level of union with the Lord,” he said.

In his speech the Pope also reflected on the challenges faced by the community of Pietrelcina and the surrounding areas, which have aging populations, especially as young people are forced to move elsewhere to find work.

He said that he hopes the territory “will be able to draw new life from the teachings of the life of Padre Pio in a difficult time like the present one.”

“Pray to Our Lady to give you the grace that young people find work here, among you, close to the family, and are not forced to leave to look for another way.”

At the same time, he emphasized the importance of the elderly, who he said he would award the Nobel Prize if he could, because they “give memory to humanity.”

After his speech, the Pope spent a period greeting faithful before departing by helicopter for San Giovanni Rotondo.