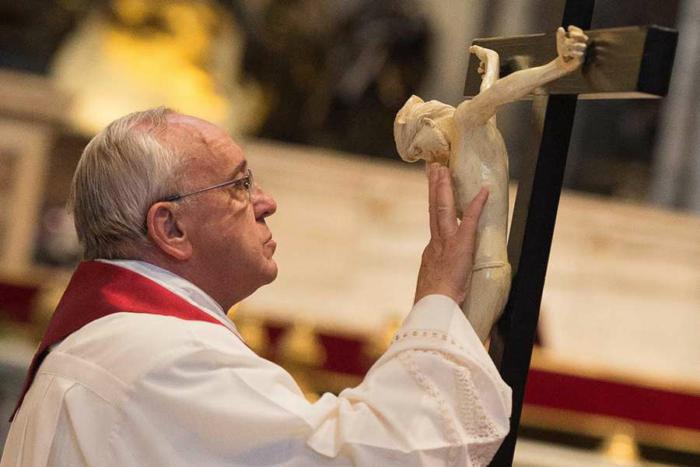 Pope Francis venerating the Cross at the Liturgy of the Lords Passion on Good Friday in St Peters Basilica on April 3 2015. Photo credit: LOsservatore Romano CNA

Denver, Colo., Mar 26, 2018 CNA.- As Catholics around the world are buying Easter candy and dyeing boiled eggs, two priests have offered suggestions for getting the most out of Holy Week.

“The most important, I believe, is to take advantage of the opportunities of prayer, especially attending each of the Triduum liturgies,” said Fr. Gary Benz of the Diocese of Bismarck, N.D.

“I’m not sure if a lot of Catholics have ever attended all three liturgies – Holy Thursday, Good Friday, and Holy Saturday Vigil – and experienced the whole paschal mystery in the passion, death and resurrection,” Fr. Benz told CNA.

While it may not be easy to attend all three liturgies, Benz encouraged Catholics, including families, to at least attempt attending these opportunities for prayer. He additionally noted that most churches offer an “extension of prayer” after the Triduum liturgies, which is another way to experience a fruitful Holy Week.

“On Holy Thursday, the church has set up an altar of reposition for adoration of the Blessed Sacrament, usually until midnight,” Benz remarked.

“If individuals or families could take to heart the plea of Jesus in the garden of Gethsemane, ‘Could you not spend one hour with me?’ and to just really sacrifice and spend that hour with the Lord,” he continued, particularly encouraging families to participate together in this time of adoration.

“What a powerful witness to your kids – that you’re giving one hour to Christ, which is again by way of great sacrifice, considering the busyness of family life.”

Fr. Daniel Ciucci of the Archdiocese of Denver also recommended additional prayer on Holy Saturday, specifically found in the Church's Office of Readings.

“I would encourage people to read the Office of Readings for Holy Saturday, beginning with ‘Something Strange is Happening,’” Fr. Ciucci told CNA.

‘Something Strange is Happening’ is an ancient homily traditionally read on Holy Saturday.

On Good Friday, Benz also noted a tradition on Good Friday, in which some Churches set up a chapel with an image of the crucified body of Christ. He prompted both individuals and families to “spend some time before it, gazing upon the body of Christ and his wounds.”

If that would not be possible, Benz suggested that individuals and families set up a display of the crucifix in their own homes to venerate and “maybe pray the sorrowful mysteries of the rosary.”

Benz also highlighted “an old European tradition” for the Triduum. According to this custom, from the time of the end of the Good Friday liturgy until the Easter Vigil, homes “try to produce an aura of mourning, because Christ is in the tomb,” Benz said.

“It would be great if homes could silence the radios, televisions, technology, phones, iPads – to the best they can. Even limited talked and conversation, just to meditate that Christ is in the tomb,” he continued.

“It’s really powerful to just maintain that prayerful silence and anticipation in waiting for the resurrection.”