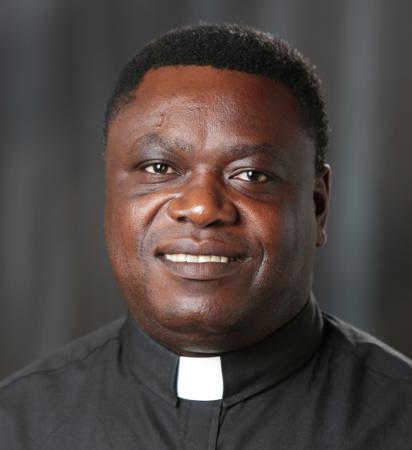 [This is the sixth in a series of articles profiling each of the seven men who will be ordained to the priesthood by Cardinal Seán P. O'Malley at the Basilica of Our Lady of Perpetual Help (Mission Church) on May 19.]

As a child growing up in the Congo, Deacon Lambert Nieme was no stranger to suffering.

At the young age of 7, Deacon Nieme lost his mother. His father, a sheep farmer, was left with eight young children. Two years after the death of his mother, his father remarried and two more children were born into his family.

"As a child, I thought a lot about death," Deacon Nieme said.

He credits his father with passing faith onto him and his siblings.

"My father taught me how to be a Christian," he said. "He gave me faith."

As Deacon Neime finished his elementary schooling, he joined the Congregation of the Most Holy Redeemer in the Diocese of Matadi, Congo. After one year, he took temporary vows, always thinking he would be ordained in his home country, but he was first sent to the Catholic University of Congo to receive his Masters in Theology.

"I always wanted to go back to my diocese and to be ordained there, but it was not meant to be," he said.

While studying in the Catholic University of Congo, Deacon Neime received a scholarship to the doctoral program in philosophy at the Universite Catholique de Louvain in Belgium.

"After defending my Ph.D. I wanted to go back to my diocese to be ordained, but they told me I was too old," the 45-year-old said with a smile. "So, instead, I turned my attention to teaching."

For the next five years, Deacon Nieme served as a professor in a seminary in Maidi, South Africa, where he taught philosophy and ethics to future priests.

"I was still looking at how I could be a priest," he said, noting that he was active in his parish no matter where he was living.

But somehow, Deacon Nieme kept receiving opportunities to study. After receiving his second doctorate -- this time in theology -- he found himself doing post-doctoral research in philosophy, anthropology and disabilities at the University of Notre Dame in Indiana.

"I remember clearly that I was there and began wondering if perhaps the American Church is where I was called to serve in the priesthood," he recalled, adding that he said to himself, "Maybe I can consider being in touch with a diocese here in the United States."

With this thought still in the back of his mind, Deacon Nieme moved to Ottawa, Canada to finish writing his fourth book.

"There I was in Ottawa and I went to a Vigil Mass and thought, I really should find a place to go," he recounted. As soon as he arrived at his home, he did an internet search and found Pope St. John XXIII National Seminary in Weston, a seminary geared specifically toward late-life vocations.

Deacon Nieme immediately contacted Father Dan Hennessey, vocations director for the Archdiocese of Boston, to inquire about entering the seminary.

"From the moment we met, Father Hennessey has trusted me," he said. "He welcomed me and treated me like a brother in Christ."

Deacon Nieme applied to the seminary and was accepted as a seminarian for the Archdiocese of Boston.

"Many of the people I know were thinking I was crazy," he said with a laugh. "Here I am, I have two PhDs. I have been a professor. I have written four books. I have done so much, and now I am entering a seminary to begin again!"

Adopting a more serious tone, he added, "I have done things in academics, and many, many things in the world. I have had much success, but I have not had the promise of sanctity. I have not been able to fulfill that which I know is my calling."

Because Deacon Nieme had already completed all the formal studies necessary to be ordained a priest -- and had even been a seminary professor -- his path at the seminary has been a bit atypical. He spent one year living in Pope St. John XXIII where he lived a life of prayer with his brother seminarians, then spent one pastoral year where he served at a parish. In 2017 he was ordained a transitional deacon, and will be ordained to the priesthood this month.

He sees this new chapter in his life as a means to bring Christ and his message to the world.

"The Church needs men and women of faith because we are living in this world that is more and more secularized," he said. "As a priest -- no, as a Christian, as a baptized Christian -- today, I need to be that courageous witness of Christ in this world."

Thinking back on his life, Deacon Nieme realizes that he has always found welcoming and solace within the Church, no matter where he has lived.

"I don't feel like a foreigner in the Church," he said. "I feel at home. I may come from outside -- from Congo, and Belgium, and Canada and everywhere, but I have come here and now I am home."