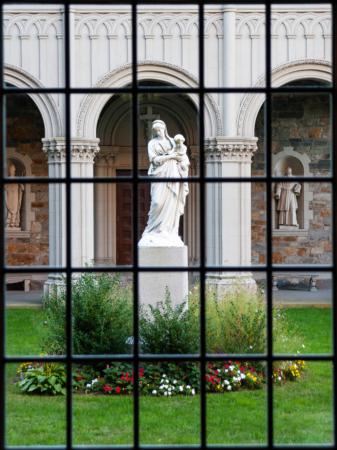 A view into the courtyard of St. John's Seminary in Brighton. Pilot file photo/Gregory L. Tracy

Cardinal will not attend World Meeting of Families

Cardinal Seán P. O'Malley announced Aug. 10 that he has ordered an investigation into allegations made by former seminarians of inappropriate conduct at St. John's Seminary in Brighton. St. John's rector Msgr. James P. Moroney has been placed on "sabbatical leave" effective immediately, and Father Stephen E. Salocks has been named interim rector.

"Earlier this week I was informed that two former seminarians of St. John's Seminary in the Archdiocese of Boston had posted allegations on social media sites including the Archdiocese's Facebook page that during their time at the seminary they witnessed and experienced activities which are directly contrary to the moral standards and requirements of formation for the Catholic priesthood," the cardinal said in his statement.

"As Archbishop of Boston, with responsibility for the integrity of the seminary and its compliance with the Church's Program for Priestly Formation, I am committed to immediate action to address these serious matters," the cardinal said.

Msgr. Moroney was placed on leave "in order that there can be a fully independent inquiry regarding these matters," he added.

According to the statement, the inquiry will be led by the auxiliary Bishop Mark O'Connell, Assumption College president and president of the USCCB National Review Board Dr. Francesco Cesareo and Kimberly Jones, CEO of Athena Legal Strategies Group. They will be assisted by archdiocesan attorney Mark Dunderdale, director of the Archdiocesan Office of Professional Standards and Oversight.

The group will be tasked with investigating the specific allegations that have been received as well as "the culture of the seminary regarding the personal standards expected and required of candidates for the priesthood, and any seminary issues of sexual harassment or other forms of intimidation or discrimination," the cardinal said.

"I have directed this group to proceed with due seriousness of their assignment and as soon as possible to submit to me the findings of the inquiry and a set of recommendations to assure appropriate standards of professional behavior in compliance with Church teaching at all levels of seminary life," Cardinal O'Malley said.

He added that, "The faculty, staff and students at the seminary will be advised of my expectation that they will fully cooperate with the inquiry."

In the piece, former seminarian John A. Monaco describes a culture of alcohol abuse and inappropriate sexual behavior, some involving faculty with seminarians, at an unnamed minor seminary, which he left, and later at a "major seminary" where he was enrolled after he decided to continue studying for the priesthood.

A similar opinion piece credited to Monaco published Aug. 9 on the website ChurchMilitant.com identifies the minor seminary as St. Charles Borromeo Seminary in Overbrook, Pennsylvania and the major seminary as St. John's, which Monaco attended from 2014-2016.

The archdiocese also confirmed that the "major seminary" referred to in the article is St. John's Seminary.

"Some priests on the faculty would get drunk with a select group of seminarians and invite them into their rooms late at night. One night, a priest on the formation faculty got so drunk during a seminary party that he fell out of his chair," Monaco wrote in his Aug. 2 article.

He also wrote, "Sometimes, I would come downstairs to the common room late at night and find seminarians cuddling with each other -- drunk, of course. Alcohol abuse was prevalent, and no one took action against it."

In the article, Monaco said he decided to speak out after hearing about the allegations of abuse of seminarians made against Archbishop Theodore McCarrick.

Another allegation came in an Aug. 7 comment by Andrew Solkshinitz on the archdiocese's Facebook page, which was linked to Monaco's article.

"I can confirm that this is true and in fact there are so many similar stories about this place. As a former Boston seminarian for 3 years I am calling upon the church to seriously examine the seminary located on Lake Street. The church has not learned her lesson and maybe if the stories are once again made public then things will finally change," Solkshinitz wrote.

On his personal Facebook page, Solkshinitz wrote that he was propositioned by a fellow student during his time at St. John's. He said when he brought the matter to the attention of the archdiocese's vocation's director and vice rector and his concerns were dismissed.

Cardinal O'Malley called the allegations, "a source of serious concern to me as Archbishop of Boston."

"The ministry of the Catholic priesthood requires a foundation of trust with the people of the Church and the wider community in which our priests serve. I am determined that all our seminaries meet that standard of trust and provide the formation necessary for priests to live a demanding vocation of service in our contemporary society," the cardinal said.

In the wake of the inquiry announcement, the archdiocese said that Cardinal O'Malley will not be attending the World Meeting of Families being held Aug. 21-26 in Dublin, Ireland in order to attend to the matters at the seminary.

In his role as chairman of the Pontifical Commission for the Protection of Minors, the cardinal had been scheduled to moderate a panel discussion at the world-wide gathering on "Safeguarding Children and Vulnerable Adults."

The archdiocese said in an Aug. 15 statement that "important matters pertaining to the pastoral care of St. John's Seminary in the Archdiocese of Boston and the seminarians enrolled in the formation program there require the Cardinal's personal attention and presence."