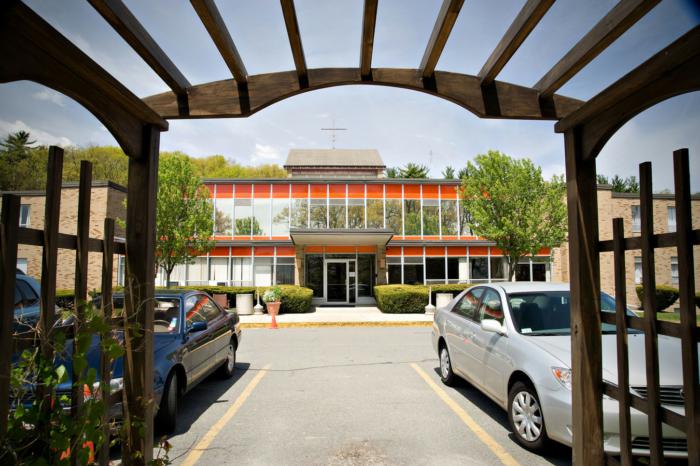 The Espousal Retreat Center, one of the buildings located on the 46-acre Waltham property of the Stigmatine Fathers and Brothers. Pilot file photo

WALTHAM -- The Stigmatine Fathers and Brothers say they intend to challenge the City of Waltham, which plans to take their property by eminent domain for use as the site of the city's new high school.

The Stigmatines own 46 acres located at 554 Lexington Street. Its facilities include the Espousal Retreat Center, a conference center, and a retirement home for priests. Four Stigmatine priests live there, and the order hosts retreats, prayer meetings, and monthly marriage preparation classes.

The current conflict comes after years of tension between the City of Waltham and the Stigmatine Fathers and Brothers over the use of the land.

In 2015 the Stigmatines engaged real estate consultants and brokers to gauge developers' interest in the site and determine its market value. One developer suggested building multifamily rental housing.

The Stigmatines maintain that they never planned to sell their property and merely wanted to explore potential uses for the property. However, when it became known that they were gauging interest, it raised concerns with the city government. The concerns centered partly around the potential negative impact a large housing development could have on the Waltham community, but also because the city sees the Stigmatine property as a prime site for constructing a new high school to meet the needs of Waltham's growing student population.

While the current high school's location at 617 Lexington Street has been considered as an option for the new school, it would not be large enough for the new, state-of-the-art, college campus-style high school that the city has envisioned for years. Additionally, building at a different location would allow students and staff to continue using the old building throughout the construction of the new campus. The old building could then be used as a K-8 school.

Mayor Jeannette McCarthy approached the Stigmatines in January 2016 to explore the possibility of the City of Waltham purchasing the property. Negotiations were attempted but ultimately broke down over the course of that year.

In May 2017 the City Council voted 12-3 against taking the land, since the Stigmatines' lawyers said they would challenge a taking by eminent domain, and such litigation would delay the building of the new school.

On Sept. 7, 2017, McCarthy submitted a new bond request to the City Council for an additional $7.4 million to purchase the Stigmatine property. The city council rejected this request because it was essentially identical to a previous one.

A few weeks later, on Sept. 20, McCarthy issued a statement to the Waltham News Tribune outlining her five reasons for making the request: "To provide for the needs of 5,663 students; To protect the interests of the Waltham taxpayers; To protect the Waltham neighborhoods from overdevelopment; To try to unite the City Council with the School Committee, School Building Committee, Superintendent, and Mayor; To try to restore the City's bargaining position."

In the letter, McCarthy acknowledged that the 196-acre Walter E. Fernald Developmental Center -- once an institution for people with developmental disabilities, now unused and falling into disrepair -- was considered as a site for the high school. However, McCarthy pointed out that the Fernald center was located on the city line between Belmont and Lexington, and argued that its cleanup would take too long and could cost taxpayers up to $100 million, while the Stigmatine site was valued at $25.4 million.

McCarthy claimed, "Acquisition of Stigmatine land has been in the City's Open Space Plan since 1994."

At a meeting on Feb. 26, 2018, the City Council directed McCarthy to restart negotiations with the Stigmatines.

On June 25, the Waltham City Council voted 10 to 4 to take the Stigmatine property by eminent domain. They would pay the Stigmatines $18 million despite its property being valued at several million more.

According to Peter Flynn, one of the Stigmatines' attorneys with a strong background in eminent domain, the Stigmatines planned to accept the payment on a pro tanto basis, meaning they would reserve the right to challenge either the amount of compensation or the validity of the legal process within the next three years.

On July 18 Flynn and the Stigmatines' other lawyer Adam Paton announced their intent to fight the eminent domain claim. Concerns about the legal process include their belief that the City of Waltham did not have an up-to-date appraisal of the land, as well as the city's failure to provide a legally required relocation advisory agent to help the Stigmatines plan their relocation.

In their July 18 letter notifying the Massachusetts School Building Authority of their intention to challenge the city, attorneys Flynn and Paton said, "It is important to emphasize that the Stigmatine fathers have been located in this locus for almost 100 years. It has historically provided a year-round schedule of religious retreats and marriage preparation courses, sanctuary for elderly and disabled Priests and has a number of facilities including significant religious monuments and shrines and a gift shop. It was not and is not a site that the Stigmatines intended to sell or relocate from."

The attorneys further wrote that "under no conditions could they (the Stigmatines) replicate the historical roots of this sanctuary property," which "truly represents the Stigmatines' public and private identity. It is a place where the Stigmatines have provided a meaningful and even life-changing ministry for thousands upon thousands of men, women, and children through their retreats and other spiritual programs offered at the Espousal retreat house. Providing a home for retired Priests who are no longer capable of continuing in the ministry has been a hallmark of their existence. Any relocation or taking will cause irreparable harm for this esteemed religious order."

A statement on the Stigmatines' website reads, "No one is doubting or discounting the need for a new high school in Waltham. We just don't believe the City should be able to end our existence here in Waltham because it covets our land for its own use."