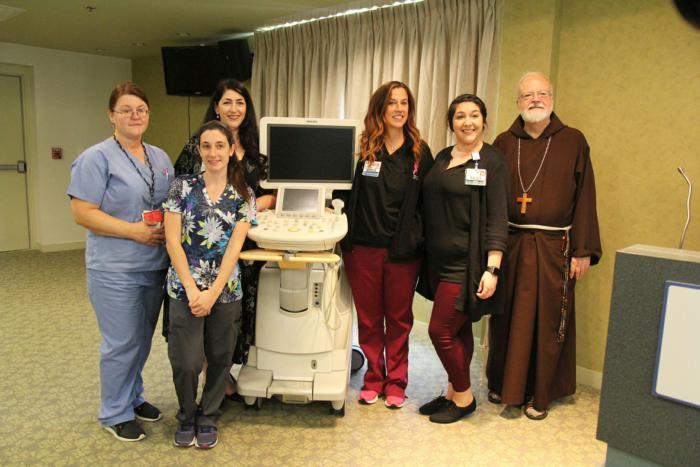 First, Cardinal O'Malley stopped by the Pregnancy Help offices. Pregnancy Help is a pregnancy resource center whose mission is to provide life-affirming alternatives for women facing crisis pregnancies, operating in greater Boston since 1973. The cardinal prayed with the staff, Knights of Columbus members and their wives, and blessed each office with holy water.

The Pregnancy Help staff and members of the Knights of Columbus then accompanied the cardinal to the Moakley Center of Good Samaritan Hospital to bless the new ultrasound machine. Many more doctors and nurses assembled to witness this blessing.

Cardinal O'Malley said, "We live in a world, in a society, where the autonomous self is so important, people don't want to be a burden, don't want help from others, and yet ... at the beginning (of life), we need help, and then for several years we are the helpers and caregivers, then at the end of life, once again we need help. This is part of our interconnectedness, and certainly our Catholic vision of community and the dignity of the human person is what brings us all here today to carry out this mission."

Mary Jo Kriz, a nurse and the outreach coordinator for Pregnancy Help, hopes that having an ultrasound machine of their own will strengthen Pregnancy Help's relationship with the hospital, since they will no longer need to rely on the hospital's equipment.

"We're really trying to build relationships with the people here," she said.

Kriz also shared a written statement with The Pilot: "On several occasions I have had the opportunity to walk with the women and men (literally and figuratively) over to the ultrasound. Before we get there they are on the fence. I watch their faces as they see the baby and see the heartbeat. When we leave they are not doubting anymore that this is a life, this is their baby. They fall in love on the spot. It is amazing."

Fundraising efforts for the ultrasound machine began in 2016. The Knights of Columbus District Deputy at the time, Andrew Vail, reached out to various pregnancy care providers in the Metro West area and came in contact with Marianne Luthin, director of the archdiocese's Pro Life office. Luthin told him there might be an opportunity to provide ultrasound services at Good Samaritan, and over several months, arrangements were made for the space and staff that would be required. Then the fundraising began.

"It was clear early that a state wide effort was going to be needed and it wouldn't have been successful without the help of the K of C State Office in Norwood; special credit and thanks are due for Dick Guerriero and John Amico at the office, and for all the State Officers," Vail, now chairman of the Ultrasound Program of the Massachusetts State Knights of Columbus, told The Pilot in an email.

He added, "It was wonderful to see it all come to closure with the blessing today by Cardinal O'Malley!"