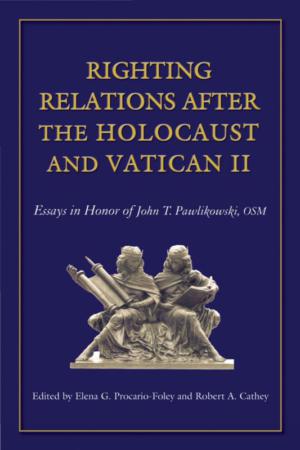 This is the cover of "Righting Relations After the Holocaust and Vatican II: Essays in honor of John T. Pawlikowski" edited by Elena G. Procario-Foley and Robert A. Cathey. The book is reviewed by Eugene J. Fisher. (CNS)

The essays in this excellent book are written by scholars from the Americas and Europe, Catholics, Protestants, Jews and Muslims, reflecting on interreligious dialogue in our time.

Aptly titled, it honors one of the great theologians of social ethics and pioneers of Catholic-Jewish relations, Servite Father John Pawlikowski, former director of the Catholic-Jewish studies program at Catholic Theological Union in Chicago.

The foreword by Judith H. Banki narrates the history of "Nostra Aetate," the 1965 statement of the Second Vatican Council that ended the ancient anti-Jewish notion that God's covenant with the Jews had been replaced by the covenant with Christians and started the Catholic Church on the path of "righting relations" with Jews, Muslims, and other world religions. Elena Procario-Foley summarizes the work leading to "Nostra Aetate" and advances since the council.

The book is divided into three parts: ethics and theology, Holocaust studies and interreligious studies.

In the first part, Mary Doak compares the works of Reinhold Niebuhr and Father Pawlikowski on social ethics. Robert Cathey shows how Father Pawlikowski's Christology challenges Presbyterian/Reformed churches to rethink their own theologies. Edward Kessler of England sees dialogue as a basis for a social foundation for the common good. Servite Father Martin M. Lintner probes the meaning of love of neighbor (Leviticus 19:18) in the thought of Jewish philosophers Emmanuel Levinas and Martin Buber.

John K. Roth tells the stories of Jewish survivors of the Holocaust such as Albert Camus and Primo Levi. Stephen Leonard Jacobs describes the "righteous gentiles" who risked their lives to save Jews from the Nazis and asks the reader, "What would you do?" Victoria Barnett of the U.S. Holocaust Memorial Museum describes a 1947 joint statement by Christians and Jews that established a theological foundation for removing anti-Judaism from Christian thought.

Menhaz Afridi, a Muslim, discusses how our Muslim, Christian and Jewish memories of each "other" are often wrong, and how we must understand the "other" as they understand themselves. Katharina von Kellenbach speaks of the "purification of memory" by which we can properly understand relations between the Abrahamic faiths. Mercy Sister Carol Rittner examines pastoral and pedagogical challenges for Christian classrooms and sermons.

Susannah Heschel, daughter of Abraham Joshua Heschel, describes his relationship with the Vatican during the council. Amy-Jill Levine critiques traditional anti-Jewish readings of the Scriptures. Ruth Langer shows how Jews can in the future present a fair understanding of Christianity in Jewish liturgy.