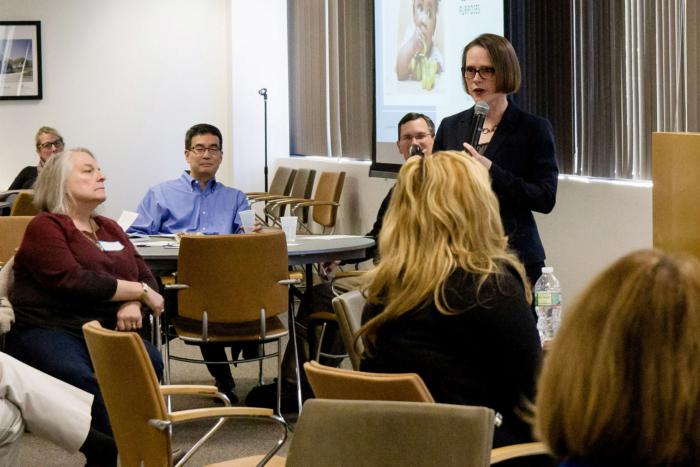 BRAINTREE -- The Pastoral Center hosted a screening of the new documentary "Sexual Revolution: 50 Years Since Humanae Vitae" and a keynote presentation by theologian Dr. Angela Franks on Oct. 18.

The film, directed by Daniel di Silva, investigates the impact of the sexual revolution on society. Writer and musician Alana Newman recorded the film's soundtrack and serves as its narrator. Throughout the film she uses the metaphor of life being a journey whose end is determined by the beginning.

Newman's father was an anonymous sperm donor. The only thing she was able to learn about him was that he was of Polish heritage. The desire to know more about him drove Newman to learn about Poland and Catholicism. After studying St. Pope John Paul II's Theology of the Body, Newman was moved to share her story but received backlash from the fertility industry.

Through interviews with numerous doctors, professors, religious leaders, and public speakers, "Sexual Revolution" traces the parallel developments in artificial contraception and natural family planning during the 1960s. Some key historical figures in the film are Dr. Gregory Goodwin Pincus, who developed the birth control pill, and Doctors John and Evelyn Billings, who developed the Billings Ovulation Method.

The screening was followed by a presentation from Dr. Angela Franks, a professor of theology at St. John Seminary. She is the author of the books "Contraception and Catholicism" and ''Margaret Sanger's Eugenic Legacy." She entitled her presentation "Humanae Vitae in the #MeToo Age" and connected the themes and questions of the movie with larger contemporary social issues and add theological reflection.

Franks said one positive result of the #MeToo movement was how it prompted women, and made it socially acceptable, to express discontent with the effects of the sexual revolution.

"People are allowed to say now that 'bad sex' is a thing. It was almost not allowed to be said. The sexual revolution was supposed to claim your undying devotion, especially if you were a woman. And now people are starting to say, 'Wait a minute, this has actually not been everything that it's promised to be,'" Franks said.

Once it is recognized that there is such a thing as "bad sex," she said, ethical dialogue in secular culture fail to fully answer the next logical question, which is "What makes sex good?"

In her presentation, Franks examined the two most common answers proposed by modern society, namely pleasure and consent.

To examine the argument for pleasure-based ethics, Franks asked the audience to consider, from an evolutionary perspective, why people eat food, something that is both necessary for survival and pleasant to experience.

"Eating is pleasurable in order that we can nourish ourselves. In other words, pleasure isn't the purpose. Pleasure is the byproduct that helps us reach the purpose. So the things that are good for us to do are often pleasurable," Franks said.

It makes sense for eating and procreating to be pleasant experiences, she said, because if they were unpleasant, people would not do them, and so the species would die out.

"This is why things like eating and things like sex are pleasurable, because it incentivizes us to do them. So we mix things up when we make pleasure the purpose instead of what goes along with it to help us reach the purpose," Franks said.

While consent is essential, she said, it is not in itself a sufficient basis for sexual ethics, because it does not take into account power dynamics that can involve pressure, coercion, and exploitation.

"A consent is not, in and of itself, enough to make a bad act good," Franks said.

She argued that consent-based ethics wrongly assume that everyone is on a "neutral playing field."

"Nobody's starting from zero. Where people are starting from is what I call 'the default of the yes.' The default position is that everybody says yes to sex. And if you want to say no, you have to work extra hard just to get to zero, much less than to get to no. And so the scale is already imbalanced, where everybody is basically expecting a 'yes,'" Franks said.

She talked about the predictions that St. Pope Paul VI made in "Humanae Vitae" that have proven to be accurate since its publication in 1968. The pope foresaw that artificial birth control would cause a general lowering of moral standards, a rise in infidelity, a decrease in respect for women, and coercive use of reproductive technologies by governments.

Franks refuted the common belief that increased access to and education about birth control decreases abortion rates. There will always be user failure and product failure, she said, and since birth control gives an assurance that having sex will not lead to pregnancy, it emboldens people to engage in more frequent or more risky sexual behavior than they otherwise would. This leads to more unplanned pregnancies in contexts where the parents do not have the desire or stability to raise the child, making them more likely to consider abortion.

Franks also spoke about the attitude of "technocracy," the idea that mankind can and should control the natural world through technology. Pope Francis explores the concept in his 2015 encyclical "Laudato Si."

"Part of what we see in the fallout of the sexual revolution is that kind of attitude, that the body and sex is deficient and we need to fix it, that leads to this attempt to technologically control things. That actually makes things much worse," Franks said.

Pope Francis suggests in "Laudato Si" that the alternative is "respecting the possibilities offered by the things themselves."

"We can be receptive to the reality that is already there in the body and in sexuality. We can say, 'What does sex already mean? What is its purpose right now?' and work with that instead of trying to fight it," Franks said.

St. Pope Paul VI introduced the term "the meaning of sex" in "Humanae Vitae" and identified it as unity between spouses and procreation of children. Because contraception takes away that meaning, Franks said, people try to impose their own meaning on sex because they do not believe it has meaning on its own.

Franks closed her presentation by talking about the role of the individual conscience, the relationship between actions and intentions, and how natural family planning differs from contraception.