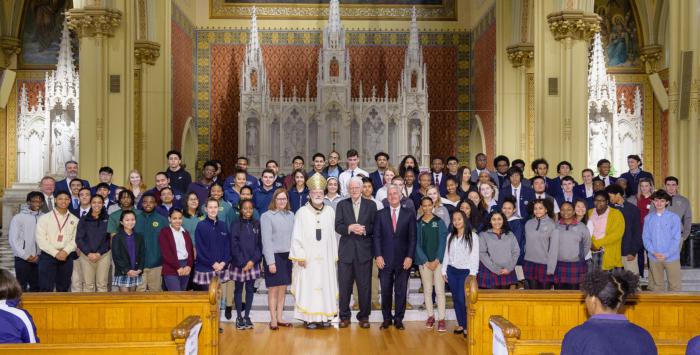 NEWTON -- Cardinal Seán O'Malley inducted 109 members of the Class of 2022 from 20 Catholic high schools into the 8th class of Catholic Schools Foundation (CSF) Scholars at an Oct. 24 Mass at Our Lady Help of Christians Church.

"Our donors believe in Catholic education," said Mike Reardon, executive director of the Catholic Schools Foundation. "They and we know that the work done by the teachers and school leaders is truly transforming the lives of young people and we are proud to partner with these schools and provide this life-changing opportunity for these students and families."

The Gerstner Scholars Program, established in 2015 by Lou Gerstner, former chairman and CEO of IBM, provides scholarships to students who exemplify what it means to be a Catholic elementary school graduate. Gerstner Scholars excel academically, display leadership, demonstrate potential for success, exhibit resilience and present themselves proudly in the community. There are currently 20 Gerstner Scholars at eight high schools in the Archdiocese of Boston.

"It is wonderful that the celebration of the CSF and Gerstner Scholars occurs at a Mass with everyone thanking God for the gifts provided to our students," said archdiocesan Superintendent of Schools Kathy Mears. "In a very real way, we are modeling for our students what generosity is and that we should praise God, with whom all things are possible. Having us come together in prayer and in communion shows that our relationship with God is of primary importance," she said.