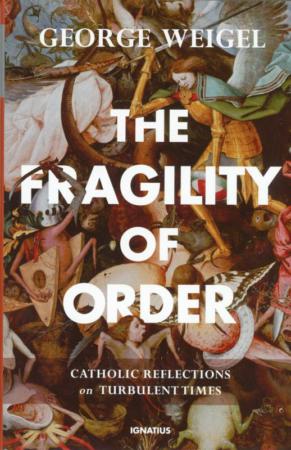 This is the cover of the book "The Fragility of Order: Catholic Reflections on Turbulent Times" by George Weigel. The book is reviewed by Patrick T. Brown. (CNS)

Since Michael Novak's death in early 2017, the undisputed title of most influential Catholic neoconservative has belonged to George Weigel. Along with Novak and the late Father Richard John Neuhaus, Weigel has been at the center of a style of spiritual-political engagement that found its apogee in the papacy of St. John Paul II and the presidency of George W. Bush.

In the intervening decade or so, the ground has shifted markedly under Weigel's feet. The momentum in both Catholicism and the conservative movement has shifted in favor of, on the one hand, Pope Francis' "church on the margins," and on the other, a right-leaning populism resulting in the election of President Donald Trump.

"The Fragility of Order" is a collection of Weigel's essays from the past two decades, offering depth and clarity to three overarching topics -- foreign policy, the American experiment, and the Catholic Church in an age of challenge from within and without.

Weigel, of course, rose to prominence with "Witness to Hope," his detailed biography of St. John Paul, written in close collaboration with the pope and his associates. The shadow of St. John Paul is never far from the topics at hand in "The Fragility of Order," with Weigel recalling the "heady" potential some predicted following the fall of the Soviet Union: "A church eager to offer humanity the healing truth of the Gospel and to make its unique contribution to building free and virtuous societies."

But history did not end in 1989, and the world, the country and the church have undergone revolutions from corners unsuspected at that time.

"Order, it has become clear, is a very fragile thing," Weigel writes. In foreign and domestic policy, he says, a Nietzschean will to power has overtaken any semblance of prudential moral reasoning, while the church, he suggests, has been weakened by an inability to present a confident countercultural message.

Weigel blames "the cultural conditions of a postmodern world," which have created a secular humanism in which nothing is sacred apart from "the worship of the imperial autonomous self." Weigel sees this "new gnosticism," which denies any kind of ontological reality, as being the root cause of instability in the domestic and foreign sphere. The church's teaching on the deep truths of the human condition, he says, can correct tendencies toward isolation or "strategic retrenchment," and recapture some concept of "ordered liberty" both at home and abroad.

In an essay revisiting Pope Leo XIII's encyclicals, Weigel would suggest we recover a conception of politics as being focused on ends, rather than means: "No 'telos,' no justice. Or ... (with) no grounding of politics and economics in the deep truths of the human condition, no society fit for human beings." Doing so requires intentionally creating space outside the market for humans to be formed in and interact, to break the tyranny of rationalism and materialism and recover a sense of the spiritual in our social and political lives.

In each essay, Weigel takes the long view, largely eschewing day-to-day controversies for a historically informed approach to the challenges facing the church. This healthy remove, aside from some jarringly aggressive attacks on former President Barack Obama, offers a cool and frank assessment of the challenges facing Catholics in public life.

At times, this coolness passes into unmerited sanguinity. When recapping the controversies surrounding the 2015 synod on the family, for example, Weigel neglects to mention Pope Francis' closing speech, which caused no shortage of heartburn among conservative critics by accusing them of "closed hearts, ... conspiracy theories and blinkered viewpoints." Skirting any direct discussion of Pope Francis' pontificate feels like airbrushing away difficult conversations that are happening within the church.

Through it all, Weigel plays the happy warrior, acknowledging that while there may be some "cause for concern about the state of affairs in the world, the American republic and the church," there is "no cause for despair, and ... no choice but to put out into the deep in a mission of truth-telling, healing and conversion." His open critique of the so-called "Benedict option" for not focusing enough on evangelization and cultural renewal feels solidly in keeping with a commission to be salt for the earth.

The potential of those immediate post-1989 years now feels squandered, and what the neoconservative turn advocated by Weigel, Novak and Father Neuhaus might have become in the absence of the Iraq War and the sex abuse crisis will keep historians busy for years. The role of "The Fragility of Order" is to re-emphasize the authentic desire that undergirded that movement -- for the church, and the United States, to live up to their full potential and be robust voices for freedom and dignity in the world.

Weigel offers us sound insights from the past -- an emphasis on evangelization, a strong sense of the uniqueness of our Catholic and American identities, of offering more than just "a way of not dying" -- that can inform our search for "order" today. The correctives he offers to foreign policy "realism" and unchecked economic libertarianism deserve a full airing.

But the size of the challenges Weigel rightly points out require a greater willingness to let go of past approaches (starting with, perhaps, a freer acknowledgment of St. John Paul's shortcomings). The same formulas that helped combat the spread of totalitarianism in the disenchanted 20th century are not the same as those that will help us find our way in a post-Christian 21st century.

Recapturing the lost luster of the Barque of Peter and the "shining city on a hill" will require more than a reapplication of past approaches, but a more fundamental restoration.
- - -