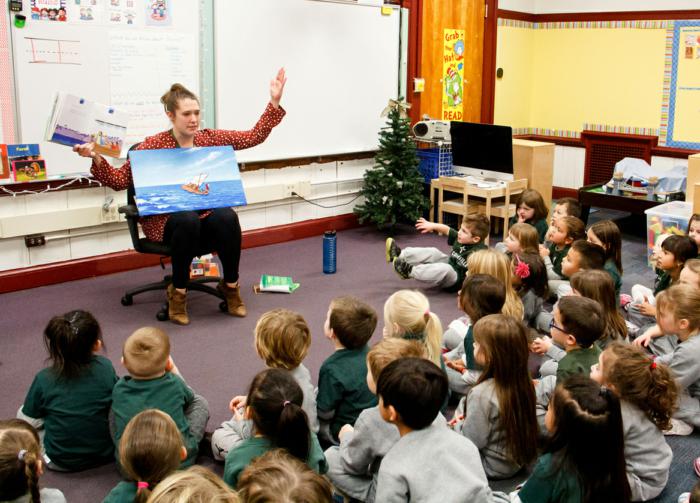 BRIGHTON -- Having worked at multiple Catholic schools, Anne Krane knows religion teachers can be "wedded to their scripted curriculum." But that is not the case at St. Columbkille Partnership School, where Krane works as a pre-k teacher and religious liaison.

After coming to St. Columbkille nine years ago, Krane worked with Head of School Dr. William Gartside and Director of Mission and Catholic Identity Rachel Rumely to restructure its religion curriculum. Today, St. Columbkille's religious education is marked by prayer, spontaneity, evangelical outreach, and a spirit of community between students, parents and teachers.

While using religious education books and the archdiocese's standards as "checkpoints," teachers personalize their lessons by talking about their own experiences and connecting their content with students' interests as well as what they are studying in other subjects.

"Kids are so curious about their teachers, and when teachers make spirituality personal, the kids are able to delve deeply into themselves, and spirituality becomes personal for them," Krane said in a phone interview Dec. 31.

To teach the parable of the lost sheep, she hides a beloved toy in the classroom for her students to find and care for. The Nativity story resonates with them because they remember being babies. When they learn that the angels said, "Do not be afraid," they relate to the feeling of fear and are happy to learn that God takes care of them.

"They love when things become personal, and I think religion can help to bridge a lot of gaps that they might have in their understanding of the way the world is," Krane said.

When the Pilot visited St. Columbkille on Jan. 7, Krane led a prayer service for four classes of three- and four-year-olds.

To introduce the topic of miracles, she read the story of Jesus calming a storm and used a felt board to illustrate it. Krane paused periodically to ask the children questions like, "How do you think Jesus' friends felt?" and "What is something you can do when you feel scared?" Through this interactive format, the students arrived at the conclusion that when they are scared they can pray to God. Krane ended the lesson by leading a prayer and a song about God's protection.

"We pray spontaneously a lot here," Gartside said, citing examples of times when students took the initiative to pray together at school events, such as before the Nativity play and during the middle-school dance.

"When everybody's engaged in this, it's not like a side bar. It's part of the fabric of who we are, how we exist," Gartside said.

Retreats are also a regular part of the school year for both students and staff. Second graders have a retreat to prepare for their first Communion. The eighth grade begins the year by climbing a mountain. Some of the biweekly staff development days are dedicated to religion.

"When you give teachers the time to reflect on their own spirituality, and support from admin, and additional resources, I think they're more able to look up from the book and tell their own story, which is a nice way of modeling curriculum for the kids," Krane told the Pilot.

Rumely said one of the most special things she does is help students and their families through the process of entering the Church. This began a few years ago, when the school sent emails to students' families asking if their children needed to be baptized. A surprising number of them responded -- and the school has extended the invitation every year since.

"It was just an amazing process of watching those students and helping them throughout the journey, but them being examples also to the other students, and the other students being able to pray for them and everyone kind of going through the process together," Rumely said.

That first year, about 20 students were baptized; now there are usually seven to 12 baptized each year. Holding the event during the school day fosters a sense of community between classmates.

"I think it also shows that we're welcoming and we're evangelizing and we're doing something really great here," Rumely said.