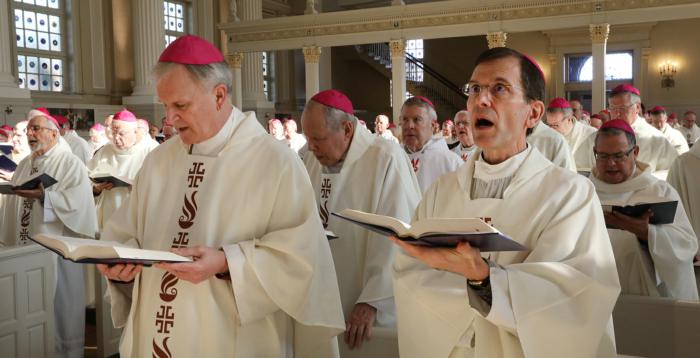 As many of you may know, for much of this past week I was on retreat with the bishops of the United States at Mundelein Seminary in the Archdiocese of Chicago. There were about 250 bishops in attendance, which is about the number that would normally attend our plenary session in November.

Father Raniero Cantalamessa, the preacher of the papal household, led the retreat for us.

Father Cantalamessa recently celebrated his 60th anniversary of ordination -- and has been the apostolic preacher since 1980. He is the latest in a long line of Capuchin friars to hold the position.

At one point, he was the head of the faculty of theology at the Catholic University of Milan. He asked permission from his superiors to become a popular preacher, but before he took up his new ministry, the father general called him to tell him that Pope John Paul II was naming him the preacher for the papal household. He has had that role ever since.

In addition to preaching Lenten, Advent, and other retreats for the Vatican, he has been a prolific writer, speaker, and retreat master all over the world. I am often amused when -- particularly in Italy and Latin America -- people come up and ask to have their picture taken with me, thinking I am Father Cantalamessa.

Once, when I was at the World Conference of Families to give a talk, there were at least 50 people who did this. So, when the time for my address came, I began by saying, "I must begin with a confession: I am not Raniero Cantalamessa -- and I am very worried because, if I do a lousy job, I may damage his reputation for eloquence!"

During the retreat, he gave two conferences, each about an hour long, and then a homily each morning. He spoke a great deal about the Holy Spirit.

His spirituality as a Capuchin friar is very much formed by his studies of the Fathers of the Church and his participation in the Charismatic Movement. The bishops truly enjoyed his preaching and his presence.

Mundelein Seminary was a very scenic and peaceful venue for the retreat. It was established by Cardinal Mundelein in the early 1900s on about 600 acres on St. Mary's Lake. It is a splendid campus with several buildings and monuments -- as well as a beautiful grotto of Our Lady of Lourdes that is illuminated at night.

The hospitality of Cardinal Cupich and the people at Mundelein was extraordinary. We felt very much at home and were also blessed with good weather. Of course, the first week of January can be brutal in Chicago. In fact, one year ago at this very time, I was supposed to have accompanied young adults from the Boston area to the FOCUS conference held in Chicago. But, because of snow, the airport was closed for three days and I was never able to go. So, it was almost miraculous that we had weather in the 40s most of the time we were there, which made it much easier to appreciate the beautiful setting.

On Wednesday, I was visited by Brother Antonio Fidalgo, the Capuchin Custos of Cape Verde. He came with Father John Currie, who is the pastor at St. Patrick Church in Roxbury and St. Peter Church in Dorchester. There, they have a large Cape Verdean community, and the Capuchin friars are helping out at the parishes.

Many years ago, Cardinal Medeiros invited Father Pio and Father Bernadino, two Capuchins of the Torino province who had ministered in Cape Verde for many years, to serve in the archdiocese. For many years, the Cape Verdean province of Capuchins supplied us with friars to work with the Cape Verdean population here in Boston. Then, for a time, they were unable to send anyone, but now they are sending friars again. We have two friars now, and our hope is that a third will come soon.