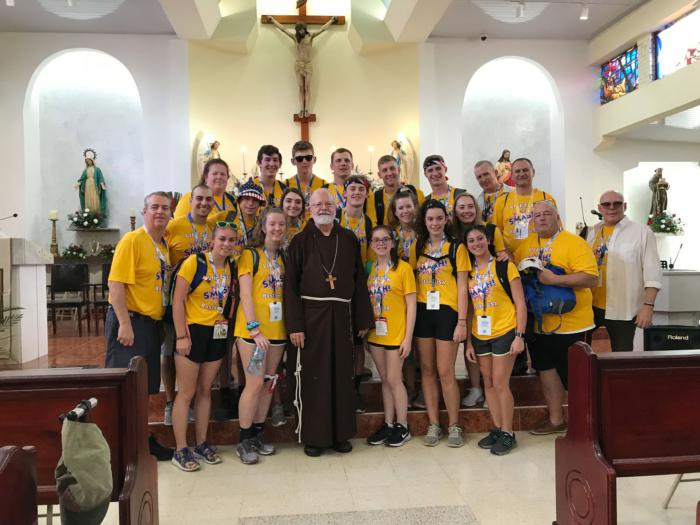 Cardinal O'Malley poses for a photo with Boston pilgrims during his trip to Panama for World Youth Day. Pilot photo/CardinalSeansBlog.org

Following the March for Life in Washington, D.C., last week, I departed for Panama, where the Holy Father is meeting with young people from around the globe for World Youth Day.

The first time that I was in Panama was back in the 1970s, when I was a young priest. Returning now, it is like going to a different country -- it is just amazing how much development has taken place here. There are, of course, still many places where people are struggling economically, but Panama City itself has just been transformed by development -- high-rises, skyscrapers, and banks are everywhere.

When I first came here, the archbishop was Archbishop Marcos McGrath, a Holy Cross Father who was a good friend of mine. His father was Irish-American and his mother was Costa Rican. He was a wonderful bishop who, I used to say, was "the tallest man in Panama!" He had been on the Notre Dame basketball team, and it was at Notre Dame that he joined the Holy Cross Fathers.

Then, he taught at St. George's College in Chile, which is run by the Holy Cross Fathers. Eventually, he became archbishop of Panama at a very interesting period in history -- the time of the wars in Central America and the ongoing negotiations over the future of the Panama Canal.

Of course, so much of the past and present of the country of Panama is connected to the canal, and recently Peter Lynch gave me David McCullough's wonderful history of the Panama Canal called the "Path Between the Seas." It is quite lengthy, but it is a very interesting story.

It is being held in January because Central America follows the academic year of South America and, in the southern hemisphere, this is their time of summer vacation. Of course, the timing made it difficult for Europeans and North Americans to attend. However, I believe the United States is still the country with the largest number of youth attending this World Youth Day.

Catechesis at the Church of Santa Eduviges (St. Hedwig)

On Wednesday, I gave my catechesis. It was held at the beautiful Church of Santa Eduviges (in English, it would be St. Hedwig). We had a full church with a group of English-speaking pilgrims from a number of countries, including the United States, India, Australia, and Ireland.

I spent the morning giving a conference and answering questions from the young people.

Then, we had a Eucharist with them.

Among the pilgrims from the United States was our own group from Boston.

The group of young people who provided the animation and music for the gathering was a band called "The Acts of the Apostles," who are Syro-Malabar Catholics from the United States, accompanying a Syro-Malabar bishop from India, Bishop Joseph.

In the afternoon, I went to the center for English-speaking pilgrims run by the Knights of Columbus and FOCUS at the Amador Convention Center, where Bishop Robert Barron and I led a Holy Hour as part of the Fiat Festival.

We had a grand Eucharistic procession and, during the Holy Hour, Bishop Baron gave a wonderful talk.