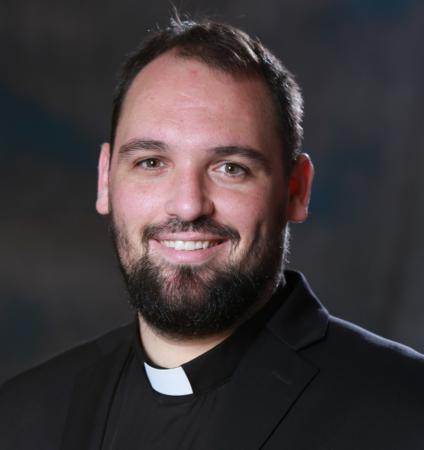 [This is the fifth in a series of articles profiling each of the 13 men who will be ordained to the priesthood on May 18.]

CHESTNUT HILL -- For Deacon Joseph Almeida, his journey to the priesthood has its roots in his relationship with the Virgin Mary.

He was born in Connecticut, the fifth of eight children. When he was six years old his family moved to Heath, Massachusetts, where they were part of a community that had a great devotion to Mary.

"That's really where I started to know the faith and our Blessed Mother," Deacon Almeida said in a March 8 interview with the Pilot.

He said he had a difficult relationship with his mother, who died when he was 10.

"It kind of put me in front of the reality of death, and made me ask the questions of what we're living for. I always had a beautiful experience with the faith, with the Church, but I also had this wound from the relationship with my mom and from her death, as I was going into my teen years," Deacon Almeida told the Pilot.

One thing that helped him, he said, was visiting the National Shrine of Divine Mercy in Stockbridge, Massachusetts, where he could attend Mass, pray the chaplet of divine mercy, and receive the sacrament of reconciliation.

"I always felt a great joy afterwards, feeling forgiven, feeling the love of God," he said.

Deacon Almeida continued to make those visits as he began attending community college, where he studied computer information systems. He said he was talented in that work but did not want to spend his life behind a computer.

"I had been going to many devotions in the Church and other things, feeling like there was something missing. I was brought up with a very strong devotion to Mary and the Church, but I wasn't seeing a real way to live that out, and I was questioning how to do this," Deacon Almeida said.

Around that time, his brother moved to New Jersey and became involved with the Neocatechumenal Way. He suggested that Deacon Almeida attend catechesis that was about to begin in Boston while continuing his studies.

"He was telling me (about) his experience there, of discovering the faith in a new way within a context of a small community. It really touched him a lot, and his experience made me start to think," Deacon Almeida said.

On a visit to the Divine Mercy Shrine, he met retired Bishop Elliot Thomas, who talked to him about the priesthood. Bishop Thomas told him the Neocatechumenal Way would help him discern his vocation.

Deacon Almeida moved to Somerville in 2005 and became a member of the Neocatechumenal Way at Our Lady of the Assumption in East Boston. In 2010, he attended a retreat in Italy for prospective seminarians from the Neocatechumenal Way to be considered for entry into Redemptoris Mater seminaries around the world. Deacon Almeida was sent to the Redemptoris Mater Seminary in Boston.

He told the Pilot that the night after he learned he was to return to Boston, he spent the night in prayer. He said it was "a beautiful moment that really showed to me that God exists."

"God always has something prepared for me to encounter to know he is with me there. So although it's not been like a lightning strike type of thing, it's been many small moments that God has confirmed that he's with me and that where I am at this time is the right place," he said.

Shortly before meeting the Pilot, Deacon Almeida and the other Redemptoris Mater seminarians went on a pilgrimage to the Shrine of Our Lady of Guadalupe in Mexico. He said he was struck by Mary's words to Juan Diego, identifying herself as his mother and assuring him of her presence and protection.

"Many times in my life, since my mom's death, I prayed to the Virgin, asking her to now be my mother, but I've doubted it many times. And to hear the words in the pilgrimage was a very strong experience for me. It's like the confirmation of a promise," he said.