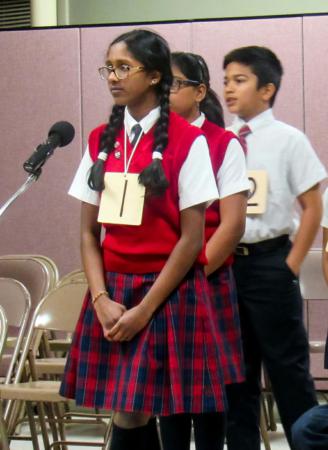 LOWELL -- On March 13, Ranjana Ramesh, a Chelmsford resident and eighth-grade student at Ste Jeanne d'Arc School, won the 34th annual Daily Item Regional Spelling Bee in Lynn, putting her on the path to compete in the Scripps National Spelling Bee this May in Washington, D.C.

"Ranjana's an extremely motivated student. She really shines in all subject areas and is definitely a well-rounded product of our Catholic school and we're very proud of her," Assistant Principal Monique Letendre told the Pilot.

This was Ranjana's first time participating in a regional bee, although she had previously made it to the Scripps National Spelling Bee.

This year, as a result of sponsors dropping out, the Daily Item's bee expanded to include other counties, enabling students from Ste Jeanne d'Arc and other schools to enter.

For the last three years, the Ste Jeanne d'Arc School spelling bee has come down to Ranjana and Navin, who is 18 months younger than she is and in grade seven. But Ranjana said there is no rivalry between them.

"He's hoping I win and I'm hoping he wins. But it goes on for a while. In the end, it's just like practicing at home, except at a real bee," Ranjana said in a March 25 interview.

Ste Jeanne d'Arc provides many resources to prepare students for the school bee. Students have the opportunity to practice during recess, and, Ranjana said, many words used in books and projects in class end up on the list for the school bee.

"Just by taking advantage of what the school has to offer and expanding my vocabulary by reading, I can get a lot of the words in the bees," Ranjana told the Pilot.

She said there are also lists and tools available on websites such as Merriam-Webster.

To prepare for the regional and national bees, Ranjana studies roots and derivative forms of words. She said spellers sometimes ask for the definition of a word because that helps them identify the roots and figure out how to spell words they do not know.

"The moment before I get the word, when I walk up to the mic, that's when I feel the most anticipation and the most adrenaline because I don't know what word I'm going to get," Ranjana said.

She added, "The first word, even if it's an easy word, that's when I feel the most nervous."

However, she said, she relaxes as the bee goes on.

"When it's at the very end of the bee, between me and another person, that's when I feel the most relaxed," she said, because "that's when I know I've done my best and now it's just spelling."

Ranjana enjoys math, reading, writing, and science. She said she wants to become a doctor, which, she said, ties into why she likes studying roots: many of the words she studies are medical terms, and many words used in the medical profession come from Greek and Latin.

"Learning all those roots and those words, I can use it in the profession I hope to go into," she said.