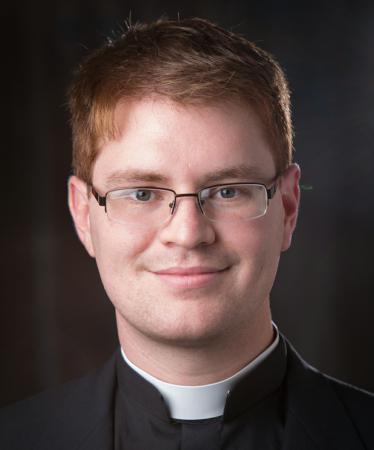 [This is the ninth in a series of articles profiling each of the 13 men who will be ordained to the priesthood on May 18.]

BRIGHTON -- Deacon Carignan Rouse was born in Tallahassee, Florida, and baptized into the Catholic Church as an infant. His mother was Catholic, and he grew up attending Mass and Sunday school.

In a Feb. 7 interview with the Pilot, Deacon Rouse said he began to invest in his faith when he was 15, shortly after he was confirmed in the Catholic Church.

"I became more interested in the faith that I had just received through the Sacrament of Confirmation," he said.

He began to study the Bible, Church history, and the works of mystics and spiritual writers. According to his profile on the website of the Vocations Office, Deacon Rouse was influenced by priest authors, such as Athanasius of Alexandria, Francois de Sales, and John Henry Newman.

He also began to receive the sacraments more often.

"The sacrament of reconciliation created a sacramental context in which to experience the priesthood in a sort of inter-personal dialogue," Deacon Rouse said in his online profile.

While growing in knowledge of the faith and devotion to the sacraments, he began to think about the vocation to the priesthood.

"Frequenting the sacraments helped to develop a sacramental consciousness and that, I think, bore the fruit of priestly vocation," Deacon Rouse told the Pilot.

He entered the seminary after graduating from high school. He was an Oratorian brother at the Toronto Oratory for eight years before coming to St. John's Seminary.

In his Vocations Office profile, Deacon Rouse said prayer helps seminarians "assess the value" of their experiences in the seminary.

"When prayer (inasmuch as it can be a discipline) becomes habitual, it becomes a part of your life that you feel dependent upon to see where and how God is drawing us to a life of charity. God uses instruments to make his paths known to us, but prayer makes the instruments as divinely posited better known to us," he said.

Deacon Rouse said he spends his free time bicycling, reading, or watching films, but that "The boundaries between leisure and duty seem to coalesce very often" in his activities.

"I am one of those people who actually enjoy reading material which is coincidentally similar in genre to the reading that we are required to do in school," he said in his online profile.

After ordination, Deacon Rouse will be a chaplain for the Air Force. He told the Pilot that he looks forward to young-adult ministry and working with families.

Deacon Rouse told the Pilot that his patron saint is St. George, who is his confirmation saint and the patron of military personnel.

In his Vocations Office profile, he also said, "I would also count St. Philip Neri among the people who interceded for me and encouraged me by his saintly example."