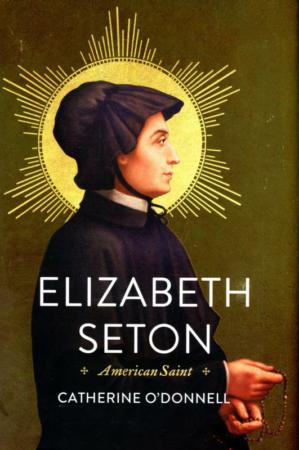 This is the cover of the book "Elizabeth Seton: American Saint" by Catherine O'Donnell. The book is reviewed by Brian T. Olszewski. (CNS)

Most Catholics have probably heard of or read about St. Elizabeth Seton, the first American-born citizen to be declared a saint, as following her canonization in 1975, it was not uncommon for new or merged parishes and schools to be named in her honor.

A few paragraphs about her in various "lives of the saints" compilations note her journey from wealth to poverty, married to widowed, and Episcopal Church to Catholic Church. They feature her founding of the Sisters of Charity and the establishment of the nation's first free Catholic school for girls.

Sometimes these biographies are accompanied by her words, e.g., "The first end I propose in our daily work is to do the will of God; secondly, to do it in the manner he wills it; and thirdly, to do it because it is his will."

"Elizabeth Seton: American Saint" is not one of those biographies. It is comprehensive to the point that one wonders if there is anything Catherine O'Donnell didn't discover about her, e.g., the saint did not like opera.

Thanks in large part to those who had the foresight to save Elizabeth's correspondence with family, friends, associates and clergy, O'Donnell is able to tell Elizabeth's story in intimate detail. It is from correspondence to a friend one gets this description of Elizabeth's religious community: "We have the best ingredients of happiness -- order, peace, and solitude."

In a letter to the same person, one gets a sample of her bluntness: "A woman unmarried, unless she is all, all, all for God, is to me one of the most pitiable beings in the world living for no purpose to be desired."

Random thoughts she wrote in a journal provide insight into her spirituality, e.g., "I am not enabled as Jesus Christ to do miracles for others, but I may constantly find occasions of rendering them good offices and exercising kindness and goodwill toward others."

At different points in the text,O'Donnell likens something Elizabeth wrote about her experiences to what St. Teresa of Avila and Julian of Norwich wrote about their experiences. The depth of Elizabeth's spirituality warrants her being mentioned in the same company as them.

One hoping for a feel-good story might be disappointed. Elizabeth writes in her "Dear Romances" -- a source O'Donnell taps throughout the book: "My own home at 20 -- The world and heaven too, quite impossible!" Such expressions of joy are outnumbered by the heartaches and spiritual struggles that were a constant in her life.

This is not a quick read, nor should it be. Length aside, one needs to patiently absorb the elements that comprise Elizabeth's journey, e.g., her childhood, contemplation of suicide, marriage, motherhood, widowhood, death of two children, poverty, ostracism for becoming Catholic, discerning her vocation, and establishing and solidifying a religious community.

Some are intertwined, each is a link to another, and all are integral to understanding who Elizabeth was. Throughout is the thread of faith -- sometimes challenged and weakened, other times unwavering.

The first six pages of "Elizabeth Seton" are a "cast of characters." This is an essential reference if one is to comprehend the multiple elements and events that shaped her life.

Among the many people who are a part of Elizabeth's story, one of the most significant was Archbishop John Carroll. Having become the first bishop of the newly created Diocese of Baltimore in 1790, he was learning how to shepherd the few Catholic souls in the fledgling country where Catholics were mistrusted outcasts who, very simply, were not welcome. As he set the foundation for the church in America, the bishop (he became archbishop in 1808) recognized the vocation of Elizabeth and provided her with spiritual guidance as she answered that call.

O'Donnell's work is not only a biography of a great and holy Catholic woman, but in telling Elizabeth's story, she also reveals an important chapter in American Catholicism placed in front of a backdrop that spans the eve of the Revolutionary War through the early 19th century.

In "Elizabeth Seton: American Saint," O'Donnell has set a high standard for works about Catholicism and history, and those that are biographical. One interested in any or all of those fields will appreciate and welcome what she has written.

Also of interest: "A Saint of Our Own: How the Quest for a Holy Hero Helped Catholics Become American" by Kathleen Sprows Cummings. University of North Carolina Press (Chapel Hill, North Carolina, 2019). 336 pp., $28.