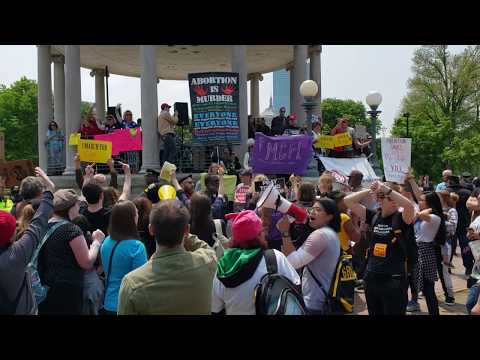 Boston -- Dozens of protestors disrupted a planned pro-life rally at Boston Common, leading to shouted arguments and physical altercations during what had in previous years been an energetic, but peaceful, call to end abortions.

For years, local pro-life organization Massachusetts Citizens for Life has held annual Massachusetts March for Life events in Boston. The march, featuring a rally with a full speaking program before a peaceful march around the city, is held to show Massachusetts lawmakers that there is a sizeable, even if underheard, pro-life movement in the state and to rise funds to support the MCFL's work.

At this year's rally on June 2, the speaking program was cut short, and those who did speak were barely audible over the shouted and megaphoned boos of dozens of pro-choice protestors.

"I think the police might need a lot more backup to clear this out," Tracy Mandile, a parishioner of the Billerica Catholic Collaborative, said.

Her daughter, Esme Mandile, stood next to her, quietly holding up a sign. It was Esme's first year attending the event, and she said she wanted to show her support because "if everyone were on the side of abortion, there would be no humans on Earth."

Protestors were a disruptive force from the start of the rally. Many covered their faces with bandanas, held up pro-abortion signs, and loudly booed each speaker, drowning them out. Several started physical altercations and were handcuffed and taken away by the several police officers present.

While many pro-life supporters stood their distance during the rally, silently holding up signs in support, some engaged verbally or physically with the protestors.

"I wish you had been aborted," one pro-life supporter said to protestor Susanna Edwards as she held a pro-choice sign with her son.

Edwards, who had driven to Boston from Maine specifically to protest the event, explained that her mother had an abortion at a young age, one that saved her life.

She had an abortion, too, years ago, at a time when she felt she couldn't raise a child. It would have negatively changed her life, she said.

Now, Edwards said, she has four children and would do anything for them.

"There's no way I can look at my children now and think that it wasn't the right thing to do," Edwards said.

For many pro-life attendees, the protests signified just how divided the country has become on the issue of abortion, and just how much progress the pro-life movement has made.

"Every year it's important to stand up for life, and this year in particular because of what's going on in the state act with the ROE Act, which is horrible," Mike Murray, chairman of the West Roxbury chapter of Massachusetts Citizens for Life, said.

If passed, the ROE Act would allow abortions at any point during pregnancy and provide state funding for women who cannot afford to pay for an abortion. It would also eliminate several current requirements, including that late-term abortions must take place in a hospital, that a child who survives an attempted abortion must receive medical care, and that a minor must have parental or judicial consent to undergo an abortion.

Similar laws are under debate in other historically "blue" states. Across the country, however, several conservative states have recently passed laws drastically restricting abortions, even as those restrictions are beginning to be shot down in federal courts.

"Thank God some of these states have enacted legislation to recognize if a baby's heart is beating, the baby is alive," Murray said. "The laws are acknowledging science."

"In this country, we're allowing these defenseless people to be destroyed," he continued. "It's selfish; it's terribly selfish."

The march itself was successful, however. Police officers flanked the marchers as they made their way across the streets of Boston, holding their signs high and chanting popular pro-life slogans. The march was largely uninterrupted by protestors.

Standing with his family, the young Beverly Catholic Collaborative parishioner looked around at the protestors.

"They wouldn't be here if they didn't know that we are actually doing some good here," he said.