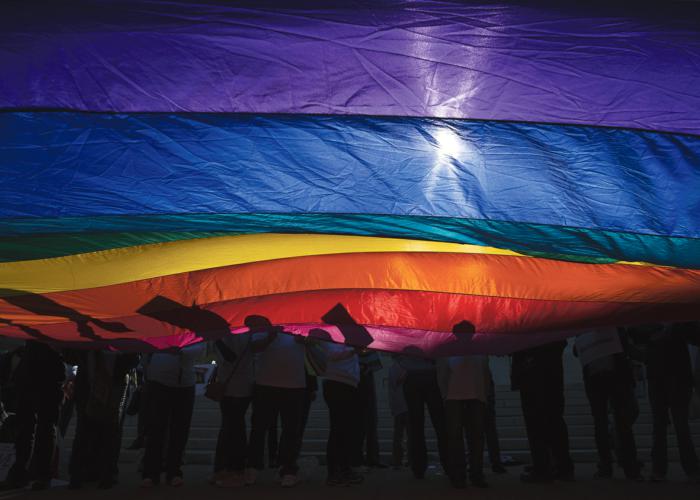 In this 2015 file photo, supporters for same-sex marriage wave a flag outside the U.S. Supreme Court in Washington. CNS photo/Tyler Orsburn

Vatican City (CNA) -- A Vatican department has issued a sweeping denunciation of so-called gender theory, and affirmed the principles of human dignity, difference, and complementarity.

"In all such [gender] theories, from the most moderate to the most radical, there is agreement that one's gender ends up being viewed as more important than being of male or female sex," the Congregation for Catholic Education wrote June 10, in a new document entitled "Male and Female He Created Them."

"The effect of this move is chiefly to create a cultural and ideological revolution driven by relativism, and secondarily a juridical revolution, since such beliefs claim specific rights for the individual and across society."

The document says it aims to set out an intellectual framework "towards a path of dialogue on the question of gender theory in education."

Published at the beginning of "Pride Month," during which many cities and corporations mark the campaign of LGBT advocacy, the document says that the Church teaches an essential difference between men and woman, ordered in the natural law and essential to the family and human flourishing.

"There is a need to reaffirm the metaphysical roots of sexual difference, as an anthropological refutation of attempts to negate the male-female duality of human nature, from which the family is generated," the document explains.

"The denial of this duality not only erases the vision of human beings as the fruit of an act of creation but creates the idea of the human person as a sort of abstraction who 'chooses for himself what his nature is to be.'"

The text, signed by Cardinal Giuseppe Versaldi, prefect of the Congregation for Catholic Education, outlines the philosophical origins of the gender theory movement, and notes the broad movement to enshrine its distinct anthropology in policy and law.

The Congregation explains that, beginning in the middle of the 20th century, a series of studies were published which proposed that external conditioning had the primary determinative influence on personality. When such studies were applied to human sexuality, the document says, they did so with a view to demonstrating that sexuality identity was more a social construct than a given natural or biological fact.

"These schools of thought were united in denying the existence of any original given element in the individual, which would precede and at the same time constitute our personal identity, forming the necessary basis of everything we do."

"Over the course of time, gender theory has expanded its field of application. At the beginning of the 1990s, its focus was upon the possibility of the individual determining his or her own sexual tendencies without having to take account of the reciprocity and complementarity of male-female relationships, nor of the procreative end of sexuality," the document says.

The result was a "radical separation between gender and sex, with the former having priority over the latter."

The problem with this theory, according to the Congregation, is not the distinction between the two terms, which can be properly understood, but in the separation of the two from each other.

"The propositions of gender theory converge in the concept of 'queer', which refers to dimensions of sexuality that are extremely fluid, flexible, and as it were, nomadic."

The result of this ideological trend, according to the Congregation's assessment, is an undermining of the family.

"[In gender theory] the only thing that matters in personal relationships is the affection between the individuals involved, irrespective of sexual difference or procreation, which would be seen as irrelevant in the formation of families."

"Thus, the institutional model of the family (where a structure and finality exist independent of the subjective preferences of the spouses) is bypassed, in favor of a vision of family that is purely contractual and voluntary."

The document said that despite the challenges, dialogue remains possible. It also called for protection of human and family rights, decried unjust discrimination, and noted points of unity among people of divergent perspectives on gender ideology.

"For instance, educational programs on this area often share a laudable desire to combat all expressions of unjust discrimination, a requirement that can be shared by all sides," the document said.

"Indeed, it cannot be denied that through the centuries forms of unjust discrimination have been a sad fact of history and have also had an influence within the Church. This has brought a certain rigid status quo, delaying the necessary and progressive inculturation of the truth of Jesus' proclamation of the equal dignity of men and women, and has provoked accusations of a sort of masculinist mentality, veiled to a greater or lesser degree by religious motives."

The aim of the Church at the institutional and individual level must be the education of children in line with authentic principles, which defend and instill authentic human dignity, the Congregation explains.

"In practice, the advocacy for the different identities often presents them as being of completely equal value compared to each other."

"The generic concept of 'non-discrimination' often hides an ideology that denies the difference as well as natural reciprocity that exists between men and women."

Referencing classical philosophy, historic Church teaching, Vatican Council II and the writings of several popes, the document explains the Church's understanding of a Christian anthropology, insisting that it be at the heart of human formation.

For Christians working in schools, both religious and secular, the radical individualism of gender theory should be avoided in favor of teaching children "to overcome their individualism and discover, in the light of faith, their specific vocation to live responsibly in a community."

Above all, the document says, the family remains "the primary community" to which the students belong and the fundamental vehicle for preserving, understanding, and transmitting human dignity.

"The school must respect the family's culture. It must listen carefully to the needs that it finds and the expectations that are directed towards it."

In the modern context, however, the essential alliance between school and family "has entered into crisis," the Congregation notes.

"There is an urgent need to promote a new alliance that is genuine and not simply at the level of bureaucracy, a shared project that can offer a 'positive and prudent sexual education' that can harmonize the primary responsibility of parents with the work of teachers."

"Although ideologically-driven approaches to the delicate questions around gender proclaim their respect for diversity, they actually run the risk of viewing such difference as static realities and end up leaving them isolated and disconnected from each other," the document concludes.

Promoting a culture of dialogue between the Church and those advancing gender theory principles must take place, the document says, in a manner that respects "the legitimate aspirations of Catholic schools to maintain their own vision of human sexuality," based on "an integral anthropology capable of harmonizing the human person's physical, psychic and spiritual identity."

The congregation ends by insisting on the rights of the Church, the family, and of Catholic educators to defend authentic teaching and understanding in the face of an increasingly exclusivist approach to education in line with secular progressive principles.

"A democratic state cannot reduce the range of education on offer to a single school of thought, all the more so in relation to this extremely delicate subject, which is concerned on the one hand with the fundamentals of human nature, and on the other with natural rights of parents to freely choose any educational model that accords with the dignity of the human person."