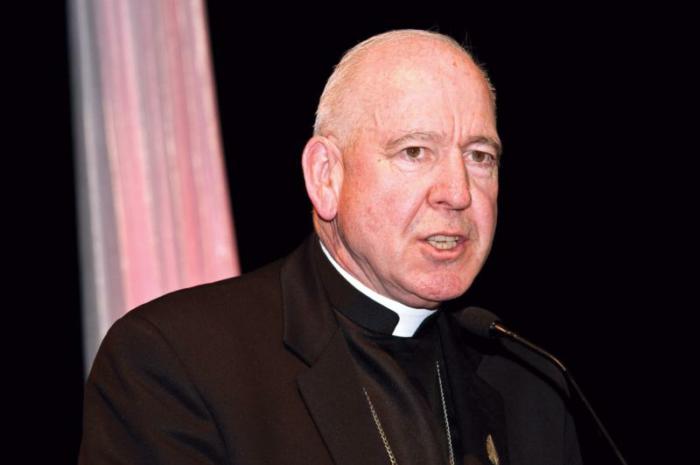 Canadian Archbishop Gerard Pettipas of Grouard-McLennan in Alberta is cautious about the prospect of married priests being ordained to serve remote areas. Archbishop Pettipas is pictured in a May 5, 2011, photo. (CNS photo/Deborah Gyapong, Canadian Catholic News)

TORONTO (CNS) -- When bishops convene in Rome this fall to begin discussions about ordaining married men to serve as priests in remote, indigenous communities in the Amazon, bishops in northern Canada will be listening closely.

The Vatican put a discussion about married priests on the agenda for the Oct. 6-27 Synod of Bishops for the Pan-Amazon region. The working document for the Rome meeting calls for "ministry with an Amazonian face" and greater access to the Eucharist in remote communities that rarely see a priest.

Like the Amazon, Canada's North faces a severe shortage of priests and a complete absence of indigenous priests.

"The people really do appreciate the sacraments. At this point, they just can't do that without a priest," said Bishop Jon Hansen of Mackenzie-Fort Smith. Bishop Hansen's diocese covers 579,000 square miles, with 30,000 Catholics in six parishes, 27 churches and no incardinated priests.

Priests currently serving in Canada's North are on loan for periods of anywhere from six months to two years.

"So I'm constantly on the lookout," Bishop Hansen said.

A conversation in Rome this fall about ordaining married, indigenous priests for service in their own communities -- priests who could offer the Mass fluently in Indigenous languages -- has perked up Bishop Hansen's ears.

"I think it would continue to be of interest to me, so I will follow it closely," he told The Catholic Register, Canadian weekly based in Toronto.

Canada's bishops have a long history of proposing ordination for married men, making proposals as far back as 1971. The most recent Canadian attempt was offered up by Archbishop Sylvain Lavoie of Keewatin-Le Pas -- which includes parts of Manitoba, Ontario and Saskatchewan. In 2011, he tried to send a long letter with supporting documentation asking Rome for permission to ordain married, indigenous clergy.

"Because we had men who were ready, who had formation already, three years of formation," said Archbishop Lavoie, now retired.

But Archbishop Lavoie could not get his plea past Rome's then-nuncio to Canada, Archbishop Pedro Lopez Quintana.

"He basically dissuaded me from even from even sending it to Rome, so it never left Canada," he said.

Archbishop Lavoie said he is happy to see the discussion revived.

"It's very encouraging that it might be coming now," he said. "It's all a process. It develops little by little. Things move slowly in Rome, of course."

To the archbishop, the logic of ordaining married men in the circumstances of remote, missionary communities is inescapable.

In the northern Alberta Archdiocese of Grouard-McLennan, Archbishop Gerard Pettipas is much more cautious about betting on married priests to make the sacraments more widely available.

"There's no doubt that there's a challenge in this," he said. "I've not personally ventured into this thing of ordaining married men. I've not promoted it."

For now, Archbishop Pettipas is relying on a community of missionary Franciscans from Kenya to help provide stable leadership in a diocese that's a mix of indigenous and non-indigenous communities.

When he looks to the Amazon, Archbishop Pettipas sees hope in how catechists have become effective ministers and representatives of the church in indigenous communities.

In surveys, Grouard-McLennan Catholics have told the archbishop that regular celebration of Eucharist is a high priority. Inviting in missionaries from other parts of the world is a good solution, he said.

Though Bishop Hansen is not betting on married priests right now, he is very clear that nothing being proposed would in any way threaten the tradition of celibate clergy in the Western church.

"Whether it's the Amazon or northern Canada or any other remote missionary place, these are exceptional circumstances that require exceptional responses," Bishop Hansen said. "I don't think it's really a threat to the celibate priesthood at all."

The efforts to push the idea of married priests in Canada began in 1971 with Bishop Alexander Carter of Sault Ste. Marie, Ontario, when he presented a paper "On the Ministry of Married Priests in the Latin Rite" at the Synod of Bishops.

"When we in Canada speak of this need, we do not restrict it to cases of numerical shortage," Bishop Carter told his fellow bishops in Rome. "There are forms of ministry that could properly use married priests, not because there are not enough celibate priests, but because of the nature of the ministry itself."

Bishop Carter's proposal went nowhere with the Vatican Curia, but he tried again in 1984. In 1987, Mackenzie-Fort Smith Bishop Denis Croteau made the argument more narrowly for the circumstances in the North.

At the 1989 Synod on "The Formation of Priests in Circumstances of the Present Day," the northern bishops again argued for ordination of "viri probati" -- men of proven character for service in their own communities. Pope John Paul II reacted with a speech in Latin saying that this argument "is too often evoked in the framework of systematic, hostile propaganda against priestly celibacy." The pope even noted the "complicity from some mass media."

Swan is associate editor of The Catholic Register, Toronto.