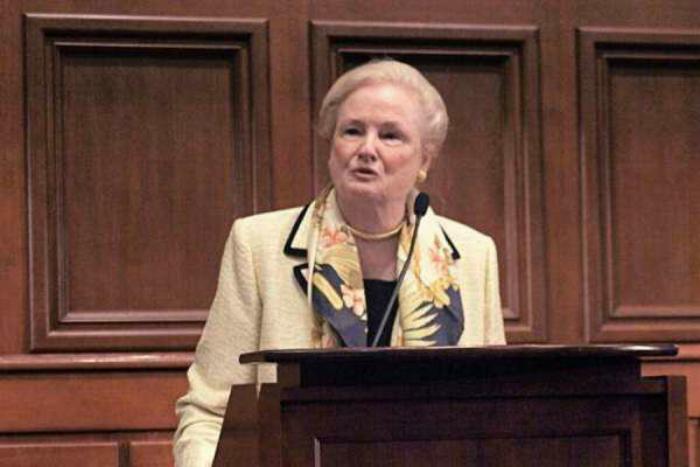 “It’s a sad commentary on our times that more than 70 years after the Universal Declaration on Human Rights, gross violations continue throughout the world,” Secretary Pompeo stated at a July 8 press conference announcing the new Commission on Unalienable Human Rights.

Pompeo said that “the time is right for an informed review of American human rights in foreign policy,” and that Glendon was “the perfect person to chair this effort” and chair the new commission.

Glendon, a former U.S. Ambassador to the Holy See in 2008-09, is a Harvard Law professor with expertise in international human rights.

She was named to the Pontifical Academy of Social Sciences by Pope St. John Paul II in 1994, led a delegation of the Holy See to the fourth U.N. Women’s Conference in Beijing in 1995, and served as head of the Pontifical Academy of the Sciences from 2004-14. In 2018, she resigned as a memeber of the Board of Superintendence, which oversees the IOR, commonly known as the Vatican Bank.

Glendon also served as a commissioner on the U.S. Commission on International Religious Freedom from 2012 until 2016, appointed by Sen. Mitch McConnell (R-Ky.).

During Monday’s press conference, Glendon thanked Pompeo “for giving a priority to human rights at this moment when basic human rights are being misunderstood by many, manipulated by many, and ignored by the world’s worst human rights violators.”

The commission, according to Secretary Pompeo, will be an advisory body made up of human rights experts, philosophers and others from across the political spectrum, with the core mission of advancing “our nation’s founding principles and the principles of 1948 Universal Declaration of Human Rights.”

In an op-ed in the Wall Street Journal on Sunday, Secretary Pompeo noted current confusion between “inalienable” rights and those granted by governments, and how contemporary discourse has confused the two with people “appealing to contrived rights for political advantage.”

“Human-rights advocacy has lost its bearings and become more of an industry than a moral compass,” he wrote, adding that institutions like the United Nations, tasked with upholding fundamental human rights, have contributed to the confusion.

Pompeo added on Monday that the commission members “will provide the intellectual grist for what I hope will be one of the most profound reexaminations of the unalienable rights in the world since the 1948 Declaration.”

“I hope that the commission will revisit the most basic of questions: What does it mean to say or claim that something is, in fact, a human right? How do we know or how do we determine whether that claim that this or that is a human right, is it true, and therefore, ought it to be honored?” Pompeo said.

“How can there be human rights, rights we possess not as privileges we are granted or even earn, but simply by virtue of our humanity belong to us? Is it, in fact, true, as our Declaration of Independence asserts, that as human beings, we – all of us, every member of our human family – are endowed by our creator with certain unalienable rights?”