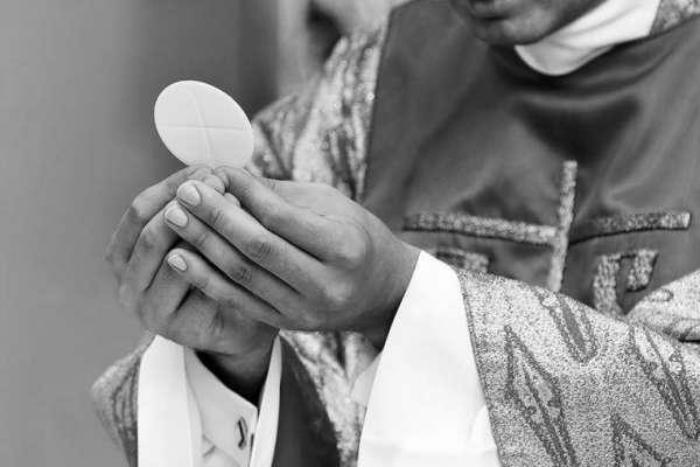 Washington D.C., Aug 10, 2019 CNA.- After a recent survey found that two-thirds of Catholics do not believe Church teaching about the Real Presence of Christ in the Eucharist, Catholic commenters are stressing the importance of better faith formation.

“We should never assume that ‘everyone here knows the basics.’ We have to constantly reiterate the basics and take every advantage that we have to catechize,” said John Bergsma, a professor of Theology at Franciscan University of Steubenville.

A recent Pew Research study found that just 31% of U.S. Catholics they surveyed believe that the bread and wine used in the Eucharist, through a process called transubstantiation, become the body and blood of Jesus— a fundamental teaching central to the Catholic faith, known as the Real Presence.

Sixty-nine percent of Catholics that Pew surveyed reported their belief that the bread and wine used during the Eucharist “are symbols of the body and blood of Jesus Christ.” This mindset made up a majority in every age group surveyed.

“Most Catholics who believe that the bread and wine are symbolic do not know that the church holds that transubstantiation occurs,” Pew reported Aug. 5.

“Overall, 43% of Catholics believe that the bread and wine are symbolic and also that this reflects the position of the church. Still, one-in-five Catholics (22%) reject the idea of transubstantiation, even though they know about the church’s teaching.”

Interestingly, a small percentage of those surveyed— 3%— claimed to believe in the Real Presence despite not knowing that this is what the Church teaches.

Los Angeles Auxiliary Bishop Robert Barron said the study made him angry because it showed poor formation for generations in the Church.

“This should be a wake-up call to all of us in the Church—priests, bishops, religious, laypeople, catechists, parents, everyone—that we need to pick up our game when it comes to communicating even the most basic doctrines of the Church,” Barron wrote on his blog Aug. 6.

The Catechism of the Catholic Church in paragraph 1374 states: “In the most blessed sacrament of the Eucharist ‘the body and blood, together with the soul and divinity, of our Lord Jesus Christ and, therefore, the whole Christ is truly, really, and substantially contained’...it is a substantial presence by which Christ, God and man, makes himself wholly and entirely present."

Bergsma told CNA that he found the results of the Pew survey unsurprising, as similar polls in the past two decades have turned up similar results.

He said many of the “self-identified” Catholics surveyed probably don’t show up at Mass very often, if at all.

“Really what this poll shows, once again, is that there are large numbers of persons in the United States who consider themselves ‘Catholic’ almost as an ethnic or cultural category, because they received one or more sacraments when they were children, or their family is traditionally Catholic,” Bergsma said.

“However, although these persons consider themselves ‘Catholic’ as a demographic category, they haven’t and don’t practice the Catholic faith, and they haven't made much effort to learn what the Catholic Church teaches.”

He called for better catechesis, especially in parish and school settings, to counter the lack of belief shown in the survey.

For Bergsma, a former Protestant pastor who once preached vehemently against the Catholic Church, a big factor in his conversion was encountering the Church’s teaching on the Eucharist.

“Jesus said, ‘This is my body … this is my blood.’ Every Christian who claims to follow Christ should take him at his word and believe in the Real Presence,” he said.

“The early Christians surely did, and reading the earliest Christian writings on the Eucharist is what converted me on this issue...For those who don’t know or reject the Church’s teaching, I would encourage them to give it a chance. Read, for example, what the Catechism says about the Eucharist, and ponder it with an open mind.”

Father Bradley Zamora, director of liturgy at Mundelein Seminary in Illinois, told CNA that the Eucharist— and what the Church teaches about it— is the “very core” of the Catholic faith, and the fact that it seems to be so misunderstood is disheartening.

“As a person of faith, as someone who has chosen to follow Christ as a disciple, you have to be willing to enter into the narrative of what we believe,” he said.

“You have to be willing to give your heart completely to Christ, you have to put on eyes of faith, you have to open your ears to the very voice of Christ. This is the disposition, as difficult as it may be, that our faith begs of us. When we gather for the Eucharist we see and hear things happening in front of us, but beneath what we see and what we hear is the very Paschal Mystery coming to life before our eyes.”

Zamora, like Bergsma, emphasized the need for better catechesis and teaching about the basic tenets of the Catholic faith. He also said that Catholics do themselves a “disservice” as a Church when they don’t speak about the mysteries of the faith as often as they can. As a seminary professor, he said he tries to bring his seminarians back to the reality of the Real Presence constantly as he teaches them how to celebrate Mass.

“When we pronounce the words of the institution narrative, ‘This is my body,’ and ‘This is my blood,’ it is Christ Himself who prays those words again in our time and space just as He did at the Last Supper,” Zamora explained.

“What we do when we gather for prayer is not some stage play, but rather we re-present the very mystery Christ instituted.”