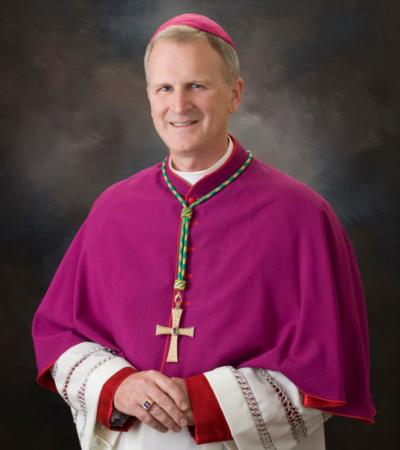 Bishop James V. Johnston of Kansas City-St. Joseph, Mo., seen in this undated photo, released a list Sept. 6, 2019, of 19 clerics with substantiated allegations of sexual abuse of children against them. (CNS photo/Scroggins, Diocese of Springfield-Cape Girardeau)

KANSAS CITY, Mo. (CNS) -- The names of two bishops appear on a list of clergy with "substantiated abuse of minors allegations" from the Diocese of Kansas City-St. Joseph released Sept. 6.

According to the list assembled by the diocese, which dates back to its founding in 1956, the abuse claims for each bishop took place within the Missouri diocese's territory. Each bishop also had more than one abuse allegation reported.

Bishop Hart, ordained a priest in 1956, had been accused of three instances of abuse dating to the late 1960s and early 1970s in Missouri. In 2008, the Kansas City-St. Joseph Diocese announced a $10 million settlement with 47 victims of sexual abuse by 12 clergy and former clergy of the diocese. Attorneys for the victims said the group included Bishop Hart, although the diocese, then headed by Bishop Robert W. Finn, did not disclose any of the clerics' names. A second financial settlement was reached by the diocese in 2014.

Bishop Sullivan, born in 1919, died in 1982 after serving eight years as bishop of Baton Rouge.

The Kansas City-St. Joseph list includes the names of 19 diocesan priests -- all but six of whom are now dead -- with substantiated allegations. A 20th priest was on a separate list with Bishops Hart and Sullivan because, like them, he had been incardinated for service in another diocese after the incidents of abuse are alleged to have occurred.

A third list carries the names of two religious-order priests who were accused of abuse during their time serving in Kansas City-St. Joseph.

Of those priests still living, they are either permanently removed from ministry or laicized. One is in federal prison. With the exception of the ex-priest now in prison, all abuse incidents took place before 1990.

Another grouping in the diocesan list has three priests -- two retired, a third permanently removed from ministry -- as being "unsuitable for ministry out of concern for the safety of our youth" as determined by Bishop James V. Johnston Jr. of Kansas City-St. Joseph.

In addition, two priests and one brother have been involved in settlements with the determination of legal proceedings or an assessment by the diocese's Independent Review Board.

The list also names priests ordained for the Kansas City-St. Joseph Diocese but are on the lists of abusive priests in other Missouri dioceses.

"An allegation is considered substantiated by any number of factors such as: admission by the accused, corroboration by witness statements, multiple similar allegations, documents, emails, photos, or through another source, such as an investigation by law enforcement or the Independent Review Board," Bishop Johnston said in a Sept. 6 message posted on the diocesan website.

"Making a determination is particularly difficult when the allegations were received by the diocese many years after the abuse and sometimes after the death of the accused. This list is based on information that is currently available. Any new information regarding allegations of clergy sexual abuse of minors will be carefully reviewed and evaluated, and if substantiated, the list will be updated accordingly," he said.

"While it is impossible to undo the past, it is possible to act in the present," Bishop Johnston added. "I renew my apology to any person who has been afflicted by acts of clergy sexual abuse, including family members. ... With the help of God's grace, I pray we will never waver from our duty to protect our children, to heal the wounded, and restore trust in the church and its mission to fulfill God's plan of salvation."