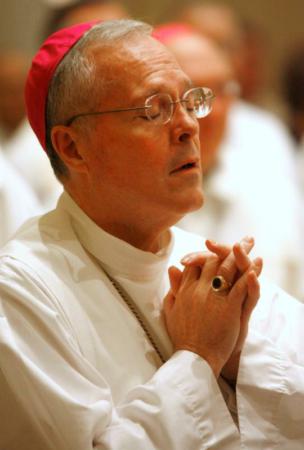 Bishop Michael J. Hoeppner of Crookston, Minn., pictured Nov. 16, 2009, is being investigated for allegedly thwarting a police or canonical investigation of clerical sexual misconduct. As the metropolitan for the province of Minnesota, North Dakota and South Dakota, Archbishop Bernard A. Hebda of St. Paul and Minneapolis will oversee the investigation, which is being conducted under protocols issued earlier this year by Pope Francis. (CNS photo/Bob Roller)

ST. PAUL, Minn. (CNS) -- Archbishop Bernard A. Hebda of St. Paul and Minneapolis will oversee an investigation of Bishop Michael J. Hoeppner of Crookston for allegedly thwarting a police or canonical investigation of clerical sexual misconduct.

Archbishop Hebda confirmed the investigation in a Sept. 10 statement to Catholic News Agency.

"Law enforcement has been notified of the allegations," Archbishop Hebda said in the statement. "The allegations were reported to me under the procedures set out in Pope Francis' recent legislation addressing bishop accountability, the 'motu proprio' (titled) 'Vos Estis Lux Mundi.'"

The archbishop is overseeing the investigation as the metropolitan for the province of Minnesota, North Dakota and South Dakota.

Pope Francis issued "Vos Estis Lux Mundi" ("You Are the Light of the World") in May. The "motu proprio" includes a number of protocols for addressing abuse claims, including holding church leaders accountable for actions or omissions related to the handling of such reports.

Archbishop Hebda said he has "appointed qualified laypersons to assist me in carrying out this investigation, to provide an independent review of its contents, and assist in its examination and analysis. All involved in this investigation have been encouraged to respond to investigators' requests and provide accurate information so that the truth in this matter may become clear."

Archbishop Hebda did not go into detail about the allegations. However, Bishop Hoeppner has been accused of pressuring a candidate for the permanent diaconate in his diocese, Ron Vasek, into recanting a statement that he was abused by a priest as a teenager in 1971.

The Catholic Spirit, newspaper of the of St. Paul and Minneapolis Archdiocese, reported in May 2017 that Vasek told Bishop Hoeppner about the abuse in 2009 or 2010. According to the story, Vasek said the bishop told him that he couldn't tell anyone, including his wife, because it would damage the reputation of the accused priest who had held leadership positions in the diocese.

Bishop Hoeppner, who remains in his post, has denied Vasek's claim that he pressured him to recant the allegation.

According to the Diocese of Crookston, the abuse allegation was reported to law enforcement in 2011.

Vasek also met with Bishop Hoeppner in October 2015, The Catholic Spirit reported, and Vasek alleges that the bishop coerced him into signing an agreement recanting his abuse accusation. However, Vasek filed a lawsuit May 9, 2017, part of which was settled in September of that year.

Archbishop Hebda noted that the investigation "is a preliminary one and not a full canonical process." He will forward his report to the apostolic nuncio to the United States and the Vatican Congregation for Bishops to determine whether a subsequent process is warranted.