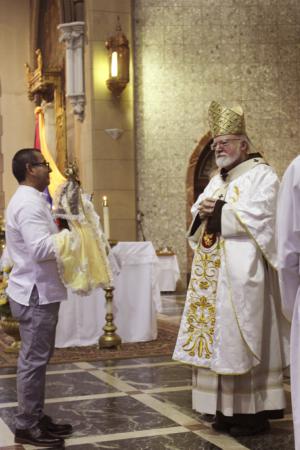 On Sunday, Sept. 8, Cardinal O'Malley visited St. Mary of the Assumption Parish in Lawrence for the celebration of Nuestra Senora del Cisne (Our Lady of the Swan). Pilot photo/CardinalSeansBlog.org

Last Friday, we had our annual gathering of newly retired priests at the Pastoral Center.

In the morning, they heard a presentation by Joe D'Arrigo and his staff of our Clergy Health and Retirement Trust, providing them with helpful information as they make the transition to the role of senior priest. Then, at noon, I joined them for lunch.

It was a wonderful opportunity to thank them for their service and give them a small token of our appreciation.

On Saturday, I attended the funeral Mass of Rita Coyne, the mother of Bishop Christopher Coyne of Vermont, at St. Barbara Parish in Woburn.

Rita Coyne had worked as the parish secretary at St. Barbara's for many years and her family was very much involved in the life of the parish. Rita had a very large and close-knit family, and many of her family and friends gathered for the celebration of her funeral Mass. Also with us was Bishop Libasci of New Hampshire, along with many priests and parishioners.

Bishop Mark O'Connell, who was a young priest at St. Barbara's during Rita's time as secretary, gave the homily and, of course, Bishop Chris Coyne was the principal celebrant. At the end of the Mass, Bishop Coyne reflected on the importance of the parish to his mother and his family -- the site of so many of his family's baptisms, first communions, confirmations, weddings, and funerals.

On Sunday, I went to St. Mary of the Assumption Parish in Lawrence to join in their celebration of Nuestra Senora del Cisne, which in English is "Our Lady of the Swan."

The name comes from the town of El Cisne in the province of Loja, Ecuador. The tradition says that, in the late 1500s, the people of El Cisne desired to have their own image of the Blessed Mother to venerate. So, they traveled to the capital city of Quito and arranged for an artist to carve a statue of Our Lady out of cedar, which they brought back and placed in a small shrine.

Then, in 1594, there was a terrible drought that led to a famine, and the people thought that they would have to abandon their town to survive. As they prepared to leave, the people came to pray before the image of the Virgin to ask for her protection as they fled. But Our Lady appeared to them and told them not to leave and that, if they remained, she would watch over them. Shortly thereafter, the rains came and restored fertility to the land.

Our Lady of El Cisne has been a very popular devotion of the Ecuadorian people ever since. I was reading that Simon Bolivar, the great figure of Latin American history, was among those who have made a pilgrimage there.

They had the church decorated with the colors of the Ecuadorian flag and the beautiful image of Our Lady of El Cisne. It was a beautiful celebration.

There was a great turnout of the Ecuadorian community for the Mass, and many of them were wearing the traditional dress of the different regions of Ecuador. We were also honored to have the consul general of Ecuador in Boston, Beatriz Almeida de Stein, join us for the celebration.

The celebration ordinarily coincides with the feast of the Assumption. However, they chose to celebrate it on September 8, the feast of the Nativity of Our Lady. In fact, in Latin America, many of the Marian feasts are celebrated on that day. As I told the people, my first public Mass was on September 8, a Mass for Our Lady of Caridad del Cobre celebrated with the Cuban community of Washington at St. Matthew's Cathedral.

There was a huge crowd of between 1,200 and 1,400 people, and afterwards there was a lovely gathering in the parish hall.