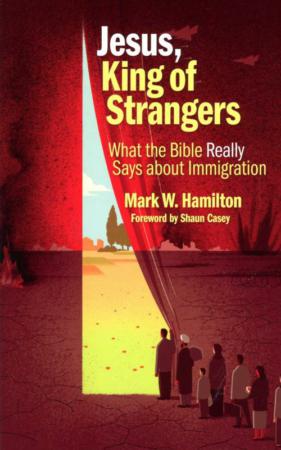 This is the cover of "Jesus, King of Strangers: What the Bible Really Says about Immigration" by Mark W. Hamilton. The book is reviewed by Agostino Bono.(CNS)

The highly polarized political climate in the United States puts on center stage on the waves of people attempting entry from south of the border. Besides the legitimate legal issues of border security and what should be the rules governing immigrants, asylum seekers and refugees, the situation has become enmeshed in the culture wars and dicey arguments about U.S. identity: ethnically, racially, linguistically and morally.

Throughout history, tensions have arisen because of massive migratory movements into new countries, as both the hosts and the migrants must make adjustments. So this is nothing new. How to handle them becomes the problem.

This book offers a Judeo-Christian framework for dealing with migrant-host issues. It delves deeply into the Bible, especially the Old Testament to search for God's hand in overseeing the migratory movements, forced and unforced, of his chosen people. The book uses "migrant" as a catch-all phrase for people on the move.

Author Mark W. Hamilton is a professor of the Old Testament at Abilene Christian University in Abilene, Texas. He sees the Bible-inspired framework as one based on mutual respect by the hosts and migrants for each other's human dignity. He reasons that this should lead to tolerance and flexibility with migrants adapting and contributing to the well-being of their new home while hosts offer opportunities for migrants to better their lives.

Hamilton doesn't get into the nitty-gritty of what should be the specific laws governing host-migrant relations nor does he offer a concrete plan for the U.S. But he strongly opposes as anti-biblical xenophobia, fear-mongering, hatred and labeling newly arrived migrants as responsible for national problems. His allusions to President Donald Trump's rhetoric are clear.

The author also sees U.S. Christianity at a crossroads, caught up in the polarization with the risk of pitting the "religious right" and its "hard legalism" against other Christians with a more open view to welcoming the stranger. He favors the latter.

The title of the book is misleading. Although it refers to Jesus as the king of strangers, only one of the 10 chapters discusses Jesus and the New Testament. It serves as the icing on the cake of his Hebrew Bible analysis of migration. Hamilton examines the Exodus, the Jewish exile under the Babylonian Empire and the diaspora, the spreading of Jews to other countries, and says that each teaches lessons.

In the Exodus, the author notes how political change can dramatically alter the fate of immigrants. Under one Egyptian pharaoh, Jews were welcomed as the pharaoh's trusted adviser, Joseph, was Jewish. But a subsequent pharaoh enslaved the Jews, using them as cheap labor to build pyramids, leading to the Exodus led by Moses.

Exile taught the Jews perseverance and patience and that God will reward those remaining faithful to him. The diaspora shows that, while immigrants must adapt to their new country, they also need to maintain ties with their culture, religion, ethnicity, language and nationality by keeping in contact with like communities in other countries.

The book also notes that such harmony and understanding based on respect for human dignity was often not the case in the Bible. Immigrants at times had to be deceptive to protect themselves from punishment or to procure food and shelter in hostile environments. Host countries fell into the temptation of seeing immigrants as vulnerable, subject to economic and political exploitation. Even when Jews were hosts, they did not always look kindly on migrants.

The point of the book, however, is to learn from the positive host-migrant relations. Whether biblical lessons will smooth over the current polarization among Christians and U.S. society remains to be seen. Meanwhile, this book is a good starting point for those seeking a Judeo-Christian perspective on these complex issues.