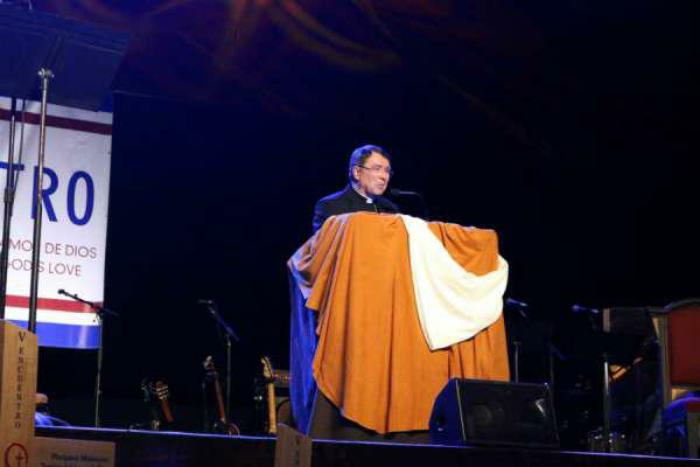 Washington D.C., Oct 23, 2019 CNA.- Last week’s Pew report revealed that Catholics are no longer a majority among U.S. Hispanics—a stark challenge to the Church in the U.S. to evangelize.

“What we’re not doing well as a Church is that we’re not building a culture in the parish where the family is truly welcome, and for Hispanics, that really is unforgivable,” said Carlos Taja, associate director to the Secretariat on Evangelization and Catechesis at the U.S. Conference of Catholic Bishops, in an interview with CNA.

Last week, the Pew Research Forum on Religion and Public Life published the results of surveys of American adults conducted in 2018 and 2019.

This decline appeared within the Hispanic demographic as well. Hispanics identifying as Catholic fell by 10% over the last decade from 57% to 47%; those “unaffiliated” with a religion grew from 15% to 23% in that time span.

This drop in the percentage of Hispanic Catholics should not come as a surprise, said Hosffman Ospino, a theology and education professor and director of graduate programs in Hispanic Ministry at Boston College. Ospino authored a report in 2014 on “Hispanic Ministry in Catholic Parishes” that examined the challenges to the future of the Catholic Church in the U.S. among Hispanics.

While Pew has historically underreported the numbers of Hispanic Catholics, he said, a decline is palpable—and not surprising.

“Why should we be surprised?” Ospino asked rhetorically of the decline in numbers. “The truth is that many Catholics in the United States,” he said, “still do not fully understand the reality of the Hispanic experience, and who Hispanics are, and what Hispanics bring to the Church.”

Among religious immigrant populations, each successive U.S.-born generation usually trends more secular, Ospino observed. In the 1990s, around half of the Hispanic U.S. population were immigrants, but today 64 percent are U.S.-born, he said, and thus according to demographic trends there should be more Hispanics today who are not Catholic.

Another social trend is the urbanization of the Hispanic population, Ospino said. More Hispanic families either live in cities or the children move to cities once they leave their family home; cities are generally more secular than rural communities, and there the youth may discover that they can live without their family’s faith.

And secularization is not just increasing in the U.S. but also in Latin America, said Fr. Allan Figueroa Deck, SJ, a distinguished scholar in pastoral theology and Latino studies at Loyola Marymount University in California.

While many variables might affect this increase in secularization, what is clear is that the Church in the U.S. cannot simply rely upon immigration to fill the pews without actively evangelizing, experts said.

“There’s this naivete, I think, where the belief that the influx of the Hispanic population through immigration was going to simply revitalize the Church in the United States by sheer numbers, without any desire to actually sometimes minister or accompany these people in the different stages of their lives,” Taja said.

The decline in the parish community and a failure to accompany new Hispanic families has led to alienation of Hispanic Catholics on a mass scale, he said.

“Most of the time, it is the reality that there is a sense that they’re just not wanted,” Taja said.

Many Latino immigrants have suffered violence or abuse on their journey to the U.S., he pointed out, yet suffering and redemption through the Cross is not a message preached at U.S. parishes.

“No one in the Church will actually speak to their reality of the things they have suffered,” he said. “What happens when you suffer, and the Lord Who died for you on the cross is not spoken with the depths of His infinite mercy for those who suffer? What happens when redemptive suffering is just never spoken about?”

Parishes have also failed to actively seek out those who might come to Church but haven’t yet walked through the doors, Ospino said.

“The Church, her identity is to be on mission, to be the Bride of the Groom,” Taja said, “to proclaim and live the ministry of Jesus Christ.”

So with a long-term decline in the Catholic population in the U.S., including within the Hispanic community, what must be done?

“If the parish community fails, the family has no place to go,” Taja said, and the family is at the crux of Hispanic culture.

In many Hispanic families, he said, the grandparents are the ones drawing the children to the faith, but many U.S. parishes don’t take this into account. Instead, for family events, they might invite husbands and wives but not grandparents.

A relationship with the parish priest is also critical in Hispanic culture, Taja said, especially for youths who have questions about the faith or doubts, or need someone to talk to.

However, in many dioceses there may be one priest for several parishes. For a parish with limited hours when the church is open, or when the pastor is only available by appointment, “that’s nuts,” Taja said. “It’s unknown, because he [the priest] is such a link to the Lord and to the Church.”

Pope Francis has provided a blueprint for evangelization, especially through his apostolic exhortation Evangelii gaudium, and the Church in the U.S. needs to take note.

Catholics must be “active” and “go out and look for these people” who aren’t coming to Church “and engage them,” Ospino said.

Latinos make up a sizable portion of Catholics in the U.S., particularly among young people, and they need to be put in more positions of leadership in the Church, Fr. Figueroa said.

“Latinos, even though they are a very large percentage of the Church,” he said, “do not enjoy positions of leadership in the Church anywhere near their numbers.”

Many Hispanics also want to be Catholic and want to be better catechized, Ospino and Taja said.

“Latinos are still here,” Ospino said. There are millions of young Hispanics in the U.S. who “want to be Catholic, they want a Church, they want to be in love with Jesus Christ,” he said.