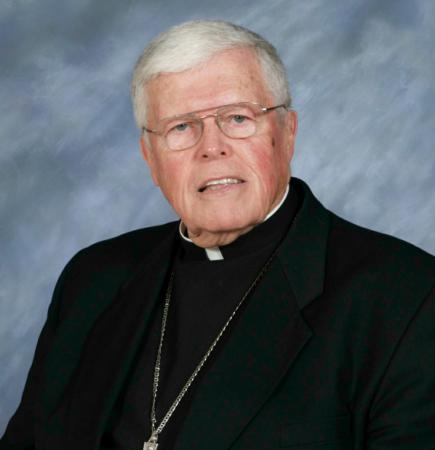 Dr. Joseph Doolin: Bishop Irwin: 'A giant of a man in so many ways'

One of the archdiocese's most highly respected priests and esteemed auxiliary bishops, Bishop Francis X. Irwin died on Oct. 30, 2019, at his home in Dennis.

He was one of the seven children of the late John and Mary (Conry) Irwin. The Irwins were raised in Medford's St. Joseph Parish; Francis attended the parish grammar school, Boston College High School and Boston College. He entered St. John's Seminary and Cardinal Richard Cushing ordained him to the priesthood at the Cathedral of the Holy Cross on Feb. 2, 1960.

For eight years, he was an assistant at three parishes: St. Joseph, Roxbury; and then one much closer to home in Medford, St. Mary of the Assumption in Revere; and then in the Merrimack Valley, where he was at St. Patrick, Lawrence (1962-1968). He returned to the Medford area, and to Boston College, when he was assigned to graduate studies at the Heights School of Social Work. During those years, he lived in residence at St. Camillus in Arlington. Although he was "only in residence," he has a large group of friends there to this day.

In June 1970, Bishop Irwin began almost two decades of appointments in Catholic Charities and Archdiocesan Social Services. During these years, he was assistant director at the Boston office, director of the Brockton Office, archdiocesan director, and in the rearrangement of the archdiocesan structure on the arrival of Archbishop Law, he was named secretary for Social Services. During that time, he left the archdiocese for an 18-month teaching stint at Fordham University. Bishop Irwin was always a presence wherever he served. He was gregarious with clergy and laity; he could tell great stories about himself and others with whom he worked and served -- always with a humorous twist, light hearted and without offence.

During his two decades at Catholic Charities, he lived in residence, first at St. Mary in Holliston and then from 1972 to 1991 at St. Susanna in Dedham. And just as he made friends in Arlington as a student priest, so he did in Holliston and Dedham as a priest in residence.

In 1991, in addition to his being secretary for Social Services, he was also named pastor at St. Susanna. Both of those appointments came to an end when in June 1993 he was named pastor of St. Agnes Parish in Arlington, succeeding the long time and very colorful and memorable pastor, Msgr. John Linnehan. Just three years later that assignment would be ended by Pope John Paul II, when the announcement was made that Father Irwin was to be an auxiliary bishop of the archdiocese.

On July 24, 1996, together with Father Emilio Allue, SDB, Father Irwin was named a bishop and designated as an auxiliary of the archdiocese. Pope John Paul II appointed him to the titular see of Ubaza and Cardinal Law ordained him and Bishop Allue to the episcopate on Sept. 17, 1996, at the Cathedral of the Holy Cross. It was the second double episcopal ordination within nine months for the archdiocese.

With his appointment as auxiliary, he was Regional Bishop of the North Region, first with offices and residence in Peabody and later residing at St. Mary of the Annunciation, Danvers. He also began to serve on a host of archdiocesan consultative bodies, boards and commissions. His counsel, advice and good humor were much appreciated by Cardinals Law and O'Malley and also by the late Bishop Richard Lennon, when he was the apostolic administrator of the archdiocese.

A friend to many priests of the archdiocese, you could always rely on Frank to shoot from the hip; to offer a word of encouragement and support and to make the call if a problem arose. One of the attributes that made him appreciated among priests is that he wouldn't ask you to do something that either he had not already done or would willingly do himself.

Bishop Irwin was predeceased by his parents; and by his sister Mary, on Jan. 12, 2008; his younger sister Joan Curran, July 31, 2008; and his brother Judge John Irwin on Christmas Day, 2008. Another brother, U.S. Air Force (Ret.) Colonel Robert Irwin, died Dec. 3, 2004. He is survived by his sister, Margaret Callahan of Randolph and his brother, Eugene of Dennis.

During his retirement, he lived variously at St. Raphael, Medford, and Regina Cleri, Boston, always ready and more than willing to return to his home in Dennis on Cape Cod. He was a regular celebrant of Masses, both daily and Sunday, at St. Pius Tenth, Yarmouth. In the years since his retirement and move to the Cape, he probably had as many friends there as he had in the archdiocese.