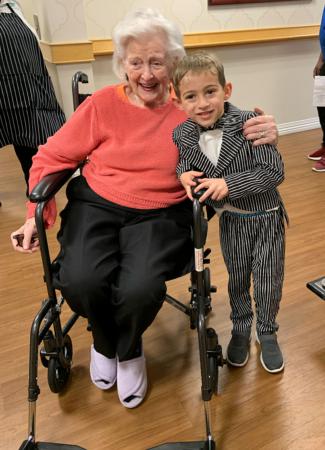 WEST ROXBURY -- Every year the students of St. Theresa of Avila School in West Roxbury have a parade in their Halloween costumes. But this year, they took the parade to a new destination: Deutsches Altenheim, a senior living community located near the school.

Several students and staff members have relatives at Deutsches Altenheim, which was originally established as a retirement residence for elderly German Americans, according to the center's website. It offers long-term care, outpatient rehabilitation, memory care, adult day health services, and assisted living opportunities.

Jean Leahy, the principal of St. Theresa's, said the idea to bring the Halloween event to the home came from fifth-grade teacher Nancy McGann during a staff meeting at the beginning of October. The staff was considering ways to expand the school's community service programs.

"We're really working to expand our mission, 'Learn together, live together, in prayer and in kindness,'" Leahy said, speaking to the Pilot on Nov. 12.

In the past, Leahy said, grade five students had sometimes visited and done activities in connection with the German home, such as making valentines for residents to display in their rooms.

McGann, whose mother lives in Deutsches Altenheim's assisted living community, told the Pilot that some of the residents are very lonely because they have outlived all their relatives and have no one to visit them. She said she hopes the students will learn from the experience "that we need to take care of each other."

On Oct. 31, despite the drizzling rain, about 250 students marched in their costumes from the school to Deutsches Altenheim. The teachers who have relatives there led the parade. McGann said that one kindergarten student saw his grandmother in a wheelchair on the front steps and ran up to her as they arrived.

The older students were paired up with younger students and coached them in how to greet the residents.

"The social communication and interactions between the fifth (and) sixth graders and the four-year-olds as well as those with the residents of the German home were delightful to see," Leahy said.

The students visited every part of the building, wishing everyone a happy Halloween.

"It was a lot of fun. The kids appreciated seeing the people and putting smiles on their faces. And it really made a difference in everyone's life. It wasn't just watching the older people smiling. The younger kids got it. They understood that they were there to make somebody happy," McGann said.

After the Halloween parade, McGann had her students share how they had felt during the visit.

"I was amazed by the kindness and deep understanding of the importance the children made in the day for these lovely people," McGann said.

The school is now planning to have the upper grades volunteer at Deutsches Altenheim on a monthly basis. Grades four through six will read to residents, and all grades will come in December to sing Christmas carols.

"My goal is that our youngsters recognize the importance of visiting the elderly, bringing their youth and spirit to them, and the mutual value for our students and for the residents. I hope that can be expanded upon," Leahy said.