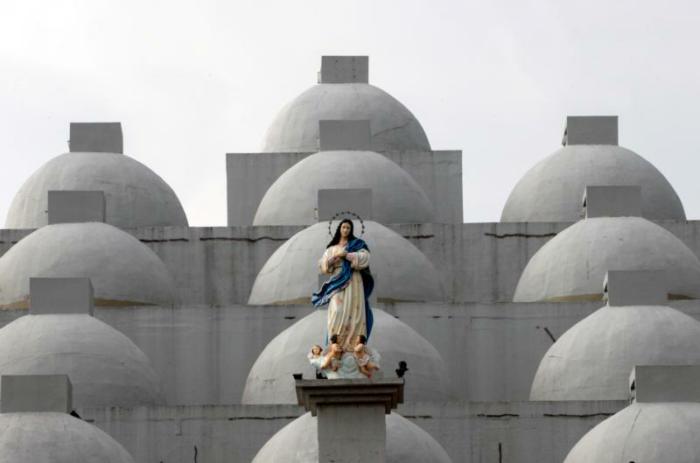 A statue of Mary is seen in 2017 atop the Cathedral of Managua in Nicaragua. On Nov. 18, 2019, a pro-government mob entered the cathedral, damaging property, attacking hunger strikers inside the building and jostling a priest and nun, the Archdiocese of Managua said. (CNS photo/Oswaldo Rivas, Reuters)

MEXICO CITY (CNS) -- A pro-government mob entered the cathedral in Managua, Nicaragua, damaging property, attacking hunger strikers inside the building and jostling a priest and nun.

Independent media reported police stood by idly as the mob moved into the cathedral, where the mothers of political prisoners were carrying out a hunger strike as part of a campaign to have their children released for Christmas.

Videos subsequently uploaded to social media show screaming protesters swarming the cathedral vicar, Father Rodolfo Lopez, and later pummeling him. The nine hunger strikers inside the cathedral were forced to relocate, according to press reports.

An Archdiocese of Managua statement issued Nov. 18 after the incident said Father Lopez and Sister Arelys Guzman, the cathedral administrator, "are fine, but had to leave the church to protect themselves."

The statement added that the mob broke various locks in the cathedral and "profaned" the building.

"We condemn these acts of sacrilege, harassment and intimidation, which do not promote peace and stability in the country," the statement said.

"We ask President Daniel Ortega and the vice president to take immediate actions so that all our churches are respected and, at the same time, the national police withdraw its troops, who are besieging and intimidating the cathedral and our parishes," it said.

The Nicaraguan bishops' conference issued a Nov. 19 statement: "We exhort those responsible for this siege to change their posture. Nicaraguans have already suffered too much pain. The families being besieged are suffering twice due to the lack of freedom for their imprisoned loved ones and, now, the state of siege which threatens their lives."

The Nov. 18 raid on the cathedral deepened a rift between the Nicaraguan church and the ruling Sandinista regime, which has baselessly accused priests and its opponents of "coup mongering" and acts of "terrorism."

The attack on the cathedral came as police in the city of Masaya -- just to the south of Managua -- continued besieging a parish, where another group 11 of hunger strikers have been holed up inside.

Authorities cut power and water to the parish, and authorities arrested a group of 13 women for trying to take water to the hunger strikers in Masaya the weekend of Nov. 16-17. Women coming to pray the rosary at the church also were removed by police, Father Edwin Roman, pastor of St. Michael's Parish in Masaya, told Nicaraguan media.

Father Roman was forced to celebrate Mass Nov. 17 with the doors shut as the police siege continued. The previous day, he attempted to take families of political prisoners into the church for a Mass, but was blocked by police.