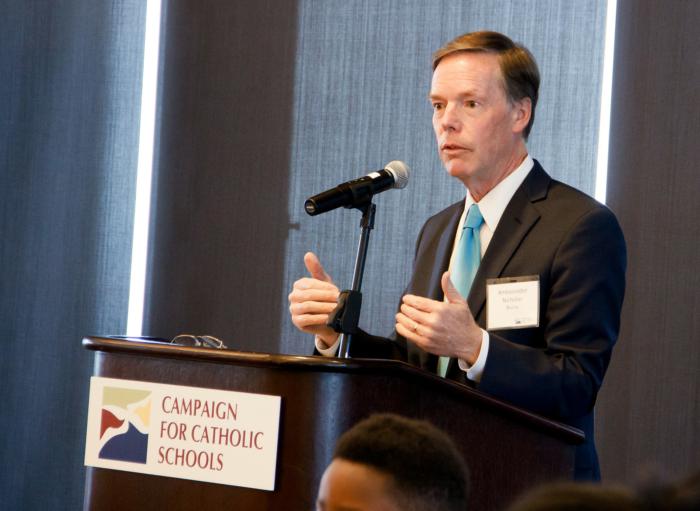 BOSTON -- Seventh- and eighth-grade students from Trinity Catholic Academy in Brockton and St. John Paul II Academy in Dorchester greeted people arriving at the Boston College Club for the Campaign for Catholic Schools' luncheon on Nov. 20.

The Campaign for Catholic Schools was established in 2007. Over the next 10 years, it combined 10 former parish schools into the two regional academies and helped create South Boston Catholic Academy.

Father William Leahy, SJ, president of Boston College and a trustee of the Campaign for Catholic Schools, offered brief remarks at the start of the Nov. 20 event.

Addressing the campaign's benefactors, he said, "What motivates you, in part, is a desire to help those who are in need and that they, in turn, will continue doing good."

Father Leahy said he was reminded of how important Catholic schools are to the future of Catholicism in the United States.

"In my experience of individuals who have gone in Catholic schools, there is a level of caring and sharing that goes on, and also a desire to engage, to commit. So, when I think of the Campaign for Catholic Schools, I think about care and commitment and sharing," Father Leahy said.

The guest speaker at the luncheon was Nicholas Burns, a 1978 graduate of Boston College and a professor of diplomacy and international relations at the Harvard Kennedy School. A career diplomat, Burns served as United States ambassador to Greece 1997-2001 and to NATO 2001-2005.

Burns spoke about a range of topics relating to American history and foreign policy, as well as Catholic education and social teaching. After his keynote speech, he answered questions from the audience.

He noted the important role Catholic schools have played in immigrant communities.

"We're an immigrant nation. We're a refugee nation. That's the essence of the United States of America. We've always been that opportunity society. But you need a structure to help people survive their first few years in the United States, and in Boston, the Catholic schools have been that escalator up," Burns said.

He said he admired the campaign's efforts to not only physically rebuild the schools but also to "give them new life."

"It's so very important we continue this effort," he said.

Burns spoke candidly about the United States' strengths and flaws, commenting on its history and its current political climate.

Burns spoke about the need to combat racism, which he said has ailed the United Stated since its founding. He admitted that, when he was growing up in the 1960s, he thought Americans had solved the problem of racism, but now he feels they have fallen back.

"We have a lot of unfinished business in America to form a 'more perfect union,'" Burns said.

He said America has a "moral vocation" both within and outside its borders. He said he believes America is great because it is a country that believes in alliances, free trade, immigrants and refugees, and democracy.

He periodically addressed the students from Trinity Catholic Academy and St. John Paul II Academy, who were seated at a table near the podium. He acknowledged that they will have to take up the "unfinished business" he spoke of.

"And you'll be able to do that because you've had this wonderful education," Burns said.