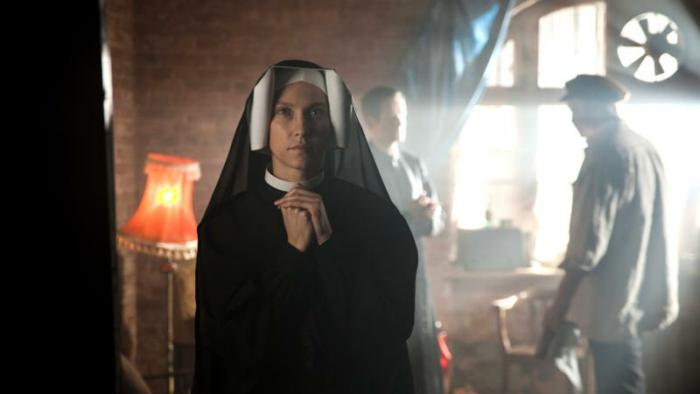 Kamila Kaminska stars in a scene from the movie "Love and Mercy: Faustina." The film contains an off-screen suicide. The Catholic New Service classification is A-II -- adults and adolescents. Not rated by the Motion Picture Association of America. (CNS photo/courtesy of Kondrat-Media)

NEW YORK (CNS) -- During Advent, Catholics are invited to look for ways to prepare spiritually for the coming of Christ at Christmas.

Experiencing the gentleness of God through learning more about St. Faustina and the devotion to the Divine Mercy might just be the perfect way to do so.

Due to popular demand, a new docudrama on the subject, "Love and Mercy: Faustina" (Kondrat-Media), written and directed by award-winning Polish filmmaker Michal Kondrat, returns to theaters Dec. 10. You can find tickets at: https://www.fathomevents.com/events/faustina-love-and-mercy.

The film's style, combining live-action storytelling with interviews and narration, makes it a compelling look at how the devotion to Divine Mercy began and spread throughout the world, bringing millions into contact with the love and clemency of Jesus, through the experience of St. Faustina Kowalska (Kamila Kaminska).

When Helena, as Faustina was known to her family, asked her father's (Piotr Cyrwus) permission to enter a convent upon finishing school, he refused. Not wishing to defy him, she started work as a housekeeper. But when she was 19 years old, she saw a vision of Jesus (Bartosz Ziemniak) during a summer dance party. He told her to go to Warsaw and enter religious life. Putting doubts aside, she did as instructed.

On the evening of Feb. 22, 1931, Sister Faustina was in her convent cell when Jesus came to her and asked her to paint an image of what she saw and to write, "Jesus, I trust in You" at the bottom. Jesus also told her to search for a confessor.

It wasn't until two years later in Vilnius, Lithuania, that she met Father Michael Sopocko (Maciej Malysa) who became her spiritual director. He instructed her to share everything about her experiences with Jesus in a diary.

Sister Faustina put the job of finding a painter for the image requested by Jesus into Father Sopocko's hands. In 1934, he hired Eugeniusz Kazimirowski (Janusz Chabior) who worked with Faustina on the original painting. There were moments of frustration for both of them as Kazimirowski struggled to capture what Faustina was describing to her satisfaction.

After Faustina's death in 1938, it was up to Father Sopocko to further the devotion to the Divine Mercy and attempt to fulfill all of Jesus' requests, including establishing a feast of Divine Mercy for the universal church.

"Love and Mercy: Faustina" takes advantage of interviews with many of the members of the clergy involved in either the furtherance of the devotion or of Sister Faustina's and Father Sopocko's causes for canonization. The influence of the Divine Mercy devotion throughout the church is explained by some of the Marian Fathers who direct the National Divine Mercy Shrine in Stockbridge, Massachusetts.

An especially fascinating sequence explores how scientists have compared the original painting with the image on the Shroud of Turin.

The opening of the movie, although beautifully filmed, tends toward the sensational in its description of salvation history and the effects of original sin. The shift from quoting the Bible to commentary could be confusing to some viewers.

The film contains an off-screen suicide. The Catholic New Service classification is A-II -- adults and adolescents. Not rated by the Motion Picture Association of America.

Polish filmmaker Michal Kondrat's docudrama tells the story of the birth and growth of the devotion to Divine Mercy that originated with the visions of Jesus (Bartosz Ziemniak) experienced in the 1930s by St. Faustina Kowalska (Kamila Kaminska). Seamlessly combining reenactments with interviews and narration, the film recounts how the saint's early death at age 33 left her confessor and spiritual director (Maciej Malysa) to continue working on her behalf to fulfill the requests that Jesus had made of her, including the establishment of a feast of Divine Mercy for the universal church. A sequence exploring how scientists have compared the original painting with the image on the Shroud of Turin is especially fascinating. An off-screen suicide. The Catholic New Service Classification is A-II -- adults and adolescents. Not rated by the Motion Picture Association of America.