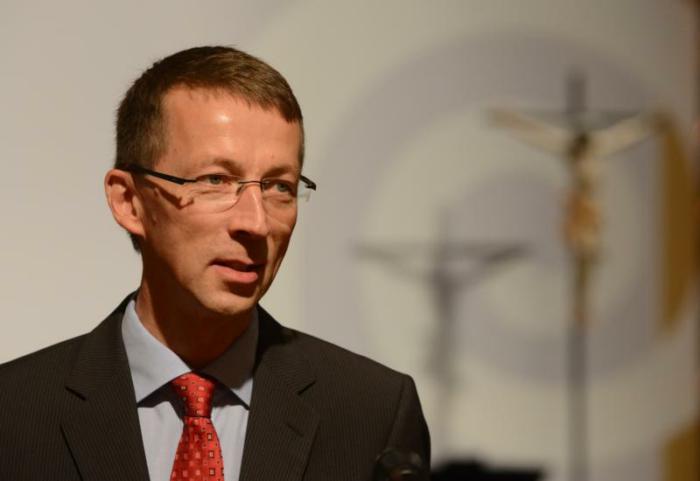 OXFORD, England (CNS) -- German Catholics insisted their national "synodal way" reform consultation will have an impact on the church worldwide, as final preparations were completed for the consultation's first plenary in January.

"Our bishops' conference verified the issues -- authority, participation, the separation of powers, sexual morality, the priestly form of life, women in church services and orders -- and wishes to face these issues, especially because a vast number of believers await this," said Matthias Kopp, the German bishops' Bonn-based spokesman.

"The binding nature of the findings will be the responsibility of all those officially involved. Depending on the issue, the Apostolic See or the local bishop will be responsible for their implementation."

Kopp spoke as a detailed agenda and participation list were finalized for the two-year consultation, which formally opened Dec. 1 with a Mass at the Munich cathedral and the lighting of "synodal candles" across Germany's 27 Catholic dioceses.

Kopp told Catholic News Service Dec. 10 that the Munich Mass, celebrated by the bishops' conference president, Cardinal Reinhard Marx, had marked the synodal way's "ceremonial and organizational beginning" and included the appointment of leaders for its four working groups.

Meanwhile, the spokesman for the lay-led Central Committee of German Catholics, which is co-organizing the synodal way, said members of the public had been invited to submit three opinions to each of the working groups: "Power, Participation, Separation of Powers," "Sexual Morals," "Priestly Existence," and "Women in Services and Offices of the Church."

"We face a big task collating them in time for the first plenary, but they're symptomatic of the many topics and themes to be debated in coming months," Theodor Bolzenius, spokesman, told CNS Dec. 10.

"It's important Catholics in other countries learn and understand what our problems are and what we think about new ways of being present in society. Though we can't take all the decisions, we can raise our voices in worldwide church discussions."

Catholics make up 28.2 percent of Germany's population of 82.7 million, according to a 2018 church yearbook, although only one in 10 practice regularly, and formal departures from the church have increased sharply in the past two years.

The number of German parishes has fallen by a quarter nationwide since 1990, while Catholic priests have dwindled from just more than 17,000 in 2000 to 13,560 in 2017, with almost a fifth of working clergy now coming from abroad, according to the yearbook.

The German bishops agreed to stage the synodal way at their March plenary and confirmed with the approval of statutes at their late-September autumn session in Fulda.

A synodal committee is currently organizing the Jan. 30-Feb. 1 plenary in Frankfurt, which will elect the four working groups to propose reforms at a second plenary, Sept. 3-5.

In a June 29 message to German Catholics, Pope Francis pledged support for efforts "to respond with boldness to the present situation," but said the consultation should also avoid "a search for immediate results."

In a Sept. 4 letter to the bishops' conference, Cardinal Marc Ouellet, prefect of the Vatican's Congregation for Bishops, warned the consultation should adhere to Canon Law procedures for a plenary council.

Several German church leaders, including Cardinal Rainer Maria Woelki of Cologne, have since voiced skepticism about the synodal way.

Kopp told CNS the German church had faced a "constant loss of credibility" following a September 2018 church-commissioned report that detailed thousands of cases of sexual abuse by Catholic clergy over six decades.

"The bishops' conference and each individual diocesan bishop may adopt the synodal way's decisions on matters whose legal regulation falls within their respective authority and competence," Kopp said. "But the Holy See decides on the implementation of decisions with universal church relevance. The German church cannot make its own rules on matters affecting the universal church -- there is no 'German special way,' separated from Rome."

A statement on the bishops' conference website said the "dissatisfaction of many believers" was the starting point for the synodal way, which would be the first national consultation since a 1971-75 synod at Wurzburg on implementing reforms of the Second Vatican Council.

It added that issues such as priestly celibacy and the ordination of women could only be "addressed and clarified" by the whole Catholic Church.