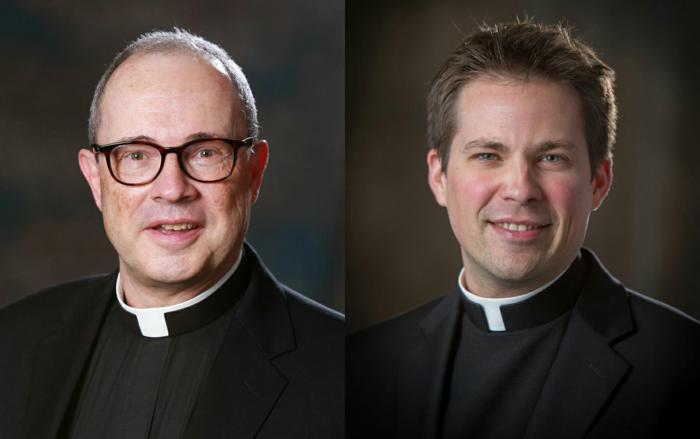 BRIGHTON -- In a letter to the faculty, trustees, and seminarians of St. John's Seminary, Cardinal Seán O'Malley announced on Dec. 17 that he has named Father Stephen Salocks as rector and Father Thomas Macdonald as vice rector of the seminary.

"Father Salocks and Father Macdonald have been functioning as the interim rector and vice rector of St. John's Seminary, but now that responsibility has been given to them officially," Cardinal O'Malley said, speaking to The Pilot on Dec. 18.

Father Salocks stepped in as interim rector in 2018 when the previous rector, Msgr. James Moroney, stepped down to ensure an independent inquiry into the culture of the seminary after two former seminarians made allegations against it. The inquiry found some internal shortcomings in the governance of the seminary, but no evidence of illegal activities or a culture of misconduct by students or faculty members.

"We're very grateful for the extraordinary job that they've done this last year, which has been a challenging time for the seminary," Cardinal O'Malley said.

Born in Troy, New York, in 1950, Father Salocks was ordained to the priesthood in June 1980. He holds a Bachelor of Science degree from Rensselaer Polytechnic Institute, Master of Divinity from St. John's Seminary, and Licentiate of Sacred Scripture degree from the Pontifical Biblical Institute. He served at St. Michael Parish in Hudson for two years before finishing his studies. He has taught Scripture at St. John's Seminary for over 30 years.

"I am grateful for the trust that Cardinal Seán and the archdiocese have placed in me. I look forward to continuing the work I began as interim rector of preparing good, solid, and holy priests for the Church in New England and beyond in the 21st century," Father Salocks said.

A native of Concord, Father Macdonald studied at the Pontifical North American College and the Gregorian University in Rome and was ordained to the priesthood in 2013. Following his ordination, he served at St. Agnes Parish in Middleton, St. Rose of Lima Parish in Topsfield, St. Ann Parish in Dorchester, and St. Brendan Parish in Dorchester. He has been on the faculty of St. John's Seminary since June and began serving as interim vice rector in September.

"I am honored to serve the St. John's Seminary community as vice rector. In this new capacity, I look forward to assisting Father Salocks as he guides the seminary to even greater excellence in the essential work of priestly formation," Father Macdonald said in a statement.

Speaking on the new appointments, Cardinal O'Malley said, "We're very encouraged by the great support and enthusiasm that have been expressed by the seminarians, the faculty, the board of trustees, and the priests of the diocese. We pray that the Lord will help them in this great responsibility that they have to work for the formation of our priests so that we will have good and holy priests to serve God's people and our Church."