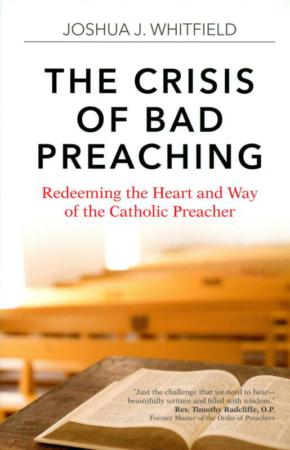 This is the cover of "The Crisis of Bad Preaching: Redeeming the Heart and Way of the Catholic Preacher" by Joshua J. Whitfield. The book is reviewed by David Gibson. (CNS)

Is there a "secret ingredient," a special yeast that enables a homilist's words to rise to the level of something fine, something others will find worth hearing?

The question matters, Father Joshua J. Whitfield makes clear in "The Crisis of Bad Preaching." He comments, "Bad preaching is part of the reason so many people have given up on the practice of the faith or have left the church."

Too often it is "painfully clear ... that the homilist hasn't employed any noticeable mental energy that would warrant taking up another person's time," he writes. He exhorts those who preach to realize that "the Gospel is more intriguing than we've been leading people to believe."

The author, a former Episcopal priest, is a married Catholic priest in Dallas, ordained in 2012 under the pastoral provision of St. John Paul II.

Is excellence lacking in Catholic preaching to the degree this author suggests? It depends who you ask, I am sure. After all, every homilist is unique.

There are homilists I've admired, though some others found them boring or unintelligible. Certainly, one homilist's excellent homily might bear little resemblance to the excellence of another's effort.

Still, the issue of excellence in preaching is real, and a discussion of how to achieve it has continued in the contemporary Catholic Church for decades. Often that discussion zeroes-in on the need to set aside enough time to prepare a homily well.

Father Whitfield accents preparation as one of the essentials of a good homily. But he cautions against the kind of preparation that reduces a homily to the level of "a book report" or to merely relaying "ideas and 'detached values.'"

Lack of preparation time is a perennial challenge for homilists. Father Whitfield is "mindful of how unreal" so many proposed preparation methods seem to them, given how busy their lives feel.

But the author will in no way play down the value of preparation. This book includes an extended exploration of what homily preparation entails.

The author has not gone in search of a recipe to assure excellence, one that might risk removing from homilies anything unique, surprising or able to connect with the actual lives of those who hear them.

Readers will not leave this book thinking that one homily "ingredient" alone unlocks the secret of excellent preaching. A homilist ought to pay attention to "four essential areas" when preparing a homily, according to Father Whitfield. Attention should be directed to sacred texts, but also to the world and real people, to liturgy and liturgical time, and to oneself and one's vocation.

The last of those points highlights a huge concern of this author, a lack of personality in preaching, which he laments. He holds that "the preacher's personality" must come into clear view, even though it is Christ's word that the preaching delivers.

He adds: "Too much preaching, in tone and gesture, simply lacks personality. ... Clunky, formulaic, cut and pasted, impersonal, it just doesn't touch listeners. And that's because listeners have nothing to touch in return -- no person, no heart, just a voice, just words."

The attention homilists pay to the lives of their listeners means "resisting the temptation to abuse the pulpit by using it as a forum for personal pet issues or for putting one's alleged expertise on display," says the author. Instead, "the preacher should be alert to the trials, tribulations, triumphs, challenges and goings-on of listeners, and preach as if these things really exist and really matter."

I would not want to neglect this book's accent on Scripture and liturgy, one of its strengths. It affirms that time spent with Scripture helps to assure that "the Gospel preached" is Christ's, and not "the gospel of the self."

In recommending the popular form of spirituality known as "lectio divina," encompassing prayerful reading and meditation on Scripture, Father Whitfield underscores its value as a means of "taking on God's view" and seeing in "the way God sees."

Thus, God's word can be "spoken by a person so saturated in Scripture" that it would be difficult not to speak "biblically."

This book might well be adopted as a discussion tool for small groups of homilists and even groups involving homilists and laity. For, the author comments, "a homily is dialogue, not monologue."

Listeners, he writes, "are active participants in what is primarily a dialogue between God and his people."