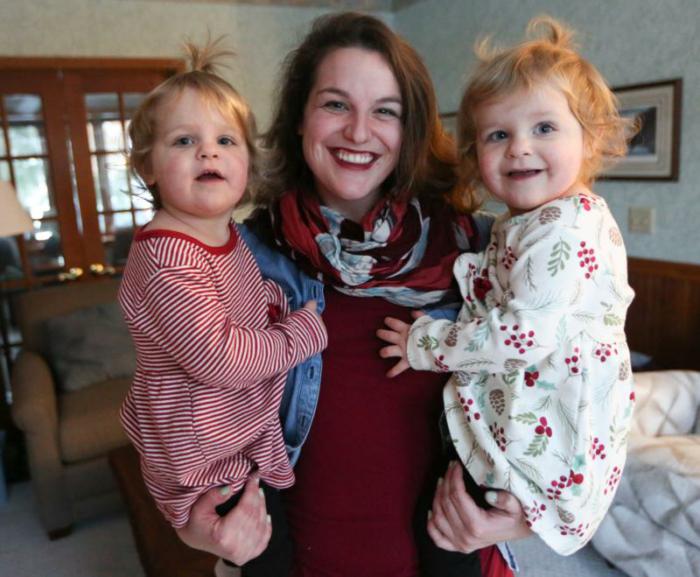 Alonna Mertz holds her twin daughters, Eve and Lilly, at the home of Joan and Robley Evans in Mendota Heights, Minn., Jan. 3, 2020. A year ago the family took in Mertz and the twins, who will turn 2 Feb. 2. Mertz became pregnant unexpectedly in 2017 and was considering abortion. She went as far as going to an abortion clinic, but what she describes as a "miracle" took place the day she went. She changed her mind and instead sought help at a pro-life center in Woodbury, Minn., where she had once volunteered. (CNS photo/Dave Hrbacek, The Catholic Spirit)

MENDOTA HEIGHTS, Minn. (CNS) -- Alonna Mertz prayed in front of abortion clinics as a teenager in Michigan, driven by her well-formed, pro-life conviction.

Then, in 2017 as a young adult, she went to such a clinic in Minneapolis for a different and unexpected reason: She was pregnant.

Dating a man whose values didn't align with hers, she found herself alone and feeling scared about the new life inside her body.

"At that point, there was enough distance between me and God that I wasn't listening to the Holy Spirit," said Mertz, 27. "I was terrified, and I made an appointment for an abortion."

Like so many other women who discover unplanned pregnancies, Mertz struggled with a torrent of tortured emotions when a home pregnancy test confirmed what she had sensed was true.

"I wept," she said of seeing the positive result. "I felt so sorry for my baby. It (her life) wasn't a white picket fence. It wasn't a mother and father who loved each other. It was broken and it was hard. And, this is what my child was going to meet. And, I just couldn't bear that reality."

She was well aware of the "big disconnect" between what she had grown up believing and what she now wanted to do. A Catholic, she had served for a year and a half with NET Ministries in West St. Paul, and even had volunteered with a pro-life pregnancy resource center in the Twin Cities after moving to Minnesota from Michigan in 2015. Still, she pressed on and went to the abortion clinic.

Finding the atmosphere there "sterile and cold," she got as far as the ultrasound room, where she would find out how far along she was in her pregnancy.

Though she knew abortion was wrong, she was consumed by one thought concerning the alternative of carrying her baby to term: "I can't do this."

Only a technical glitch that she cannot explain and a baby's cry at that clinic kept her from getting an abortion. She left the clinic that day without carrying through with her plan, and instead gave birth to fraternal twin girls, Eve and Lilly, Feb. 2, 2018, by cesarean section.

Today, she can't imagine life without them, she told The Catholic Spirit, the newspaper of the Archdiocese of St. Paul and Minneapolis.

It is a struggle, she admits, but there is joy every day, plus help from what she calls a "village" of friends and family members. They include a Catholic family in Mendota Heights with whom she now lives.

Mertz, who belongs to St. Bernard in St. Paul, recently recalled her journey from being abortion-minded to being child-focused.

When Mertz found out she was pregnant in June 2017, she told no one at first, not even her boyfriend. She went to the clinic alone for the procedure.

While sitting in the waiting room, she heard a baby's cry -- a noise that changed everything.

"It was just a split second, but it was such a distinct cry, from the back (of the clinic)," she said. "I looked and I could see other women had heard it, too, because everyone else looked to the back room."

The infant's wail triggered a thought in her mind: "This is a baby, Alonna," she said. "You know this is a baby."

Eventually, she was called in for an ultrasound to confirm the pregnancy and determine how far along she was. But, the technician could find nothing -- no image, no heartbeat. Mertz was instructed to schedule an appointment to try the test again.

No way, Mertz decided. After a reaction of "just relief," she went to the parking lot, cried for 20 minutes and looked up a pro-life center where she had volunteered -- Woodbury Options for Women Pregnancy Resource Center.

She went there a week later and got an ultrasound during the first visit. This time, there was "an immediate heartbeat, just so loud," Mertz said. Believing there was "no biological reason" for this heartbeat to be absent from the ultrasound at the abortion clinic just one week earlier, she sensed divine intervention.

"It was a miracle," she said. "These little girls were wanted and willed and protected, even from me. So, I knew this was special."

She was yet to learn how special this pregnancy was. At that first appointment in Woodbury, she thought she was having just one baby. But, she was sent to another clinic for a follow-up exam because of abdominal pain. There she was told she was having twins.

It was time to start telling people and seeking help, including a friend she had met a few years earlier, Theresa Evans.

Eventually, Mertz did tell her boyfriend, and they came back together for a year after the girls were born.

But, it didn't work out, and she turned to Evans and her family for help. Theresa's parents, Robley and Joan Evans of St. Joseph in West St. Paul, quickly and eagerly offered to let her stay in their Mendota Heights home.

She has her own apartment in the basement, and an informal lease agreement that is up for renewal every six months. So far, the arrangement has worked well for both sides, partly due to the pro-life convictions of the Evans family.

"We have a sign in our yard that says, 'Choose life,'" said Joan, 60. "You can consider yourself pro-life, but when something like this happens, it challenges you."

With all of their six children grown and most of them out of the house, Joan and Robley had room for a tenant. Theresa also lives there, and she likes being close to Mertz and her daughters. Eve is her goddaughter.

Meanwhile, Mertz, who is studying to become an MRI technician, is sharing her story publicly, including how she strayed from her Catholic faith, became pregnant and abortion-minded, and eventually returned to the church.

She hopes she will have the chance to encounter a woman in an unplanned pregnancy. She wants to say to her what she now knows after bringing twin girls into the world and raising them over the past two years: "You are not alone, and you can do this."