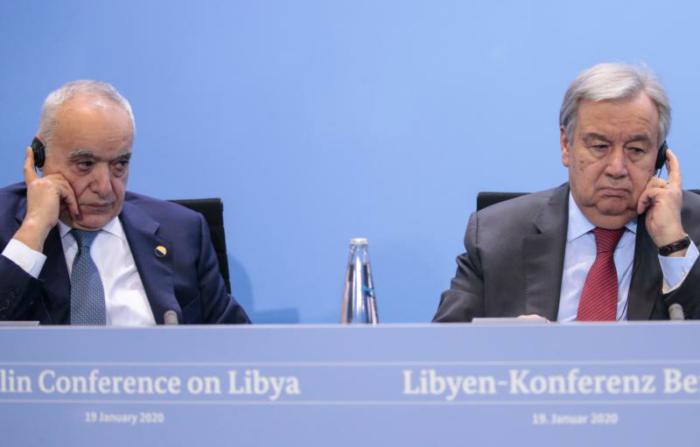 Ghassan Salame, U.N. envoy for Libya, and U.N. Secretary-General Antonio Guterres attend a news conference after the Libya summit in Berlin Jan.19, 2020. During his Jan. 19 Angelus, Pope Francis said he hoped the international summit would be the first step toward peace in war-torn Libya. (CNS photo/Axel Schmidt, pool via Reuters)

VATICAN CITY (CNS) -- Pope Francis said he hoped that an international summit in Berlin would be the first step toward peace in war-torn Libya.

"I very much hope that this summit, which is so important, will be the start of a path toward an end to violence and a negotiated solution leading to peace and the much-desired stability of the country," the pope told pilgrims Jan. 19 during his Sunday Angelus address.

The Berlin talks, which were aimed at brokering a peace deal between Libyan Prime Minister Fayez Sarraj and rebel commander Gen. Khalifa Hifter, were also attended by representatives of countries backing both sides of the conflict, including Turkey, Russia, Egypt, France, Italy, the United Kingdom and the United States.

By the end of the summit, world leaders signed a draft declaration in which they pledged to no longer interfere in the nine-month civil war, reported Al-Jazeera, the television news network.

"We commit to refraining from interference in the armed conflict or in the internal affairs of Libya and urge all international actors to do the same," the declaration read.

The declaration also called for upholding a cease-fire, enforcing an arms embargo and supporting a commitment to free elections as well as security and economic reforms.

In his main Angelus address, before appealing for a peaceful resolution in Libya, the pope reflected on the Sunday Gospel reading in which St. John the Baptist, upon seeing Jesus, declares, "Behold, the Lamb of God, who takes away the sin of the world."

St. John's testimony is an invitation for Christians to "be surprised once again by God's choice to be on our side, to show solidarity with us sinners and to save the world from evil by totally taking it upon his shoulders," Pope Francis said.

It is Jesus "alone who has suffered, who atoned for sin, for each one of our sins, the sins of the world and my sins. All of them. He took everything upon himself and took it away from us so that we could finally be free, no longer slaves of evil," the pope said. "Yes, we are still poor sinners, but not slaves. No, not slaves but children; children of God."